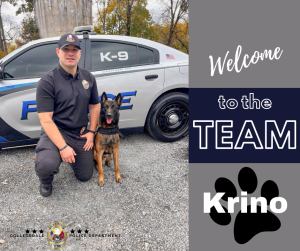 COLLEGEDALE, Tennessee (WDEF) – The Collegdale Police Department has added a new K9 officer, but it took some deal-making to pull it off.

The deal followed the hiring of a new, human police officer.

But when he got a new job in Collegedale back in office, the deal-making began.

McMinn County Sheriff Joe Guy agreed to sell his K9 partner to Collegedale, to keep the team together.

And he is now being trained for human tracking.

“He likes following me around the house to see what I’m doing,” said Officer Saxe.

“He’s very nosey. When I’m sitting on the couch or trying to relax, he wants my attention and when I don’t give it to him,
he lays beside me and pouts until I do.”

Collegedale re-started their K9 program in September and now have two dogs on the force.

RAM Clinic in Cleveland this Weekend