Washington — Gridlocked over additional hurricane recovery funds for Puerto Rico, Congress is heading into a two-week spring recess without passing a multi-billion-dollar aid package for various disaster-hit communities across the country.

After weeks of bitter finger-pointing and tense negotiations, Republican and Democratic lawmakers were not able to broker an agreement on legislation to allocate federal funds to help Puerto Ricans facing food assistance cuts. There are also communities in Midwestern states like Iowa and Missouri recovering from devastating floods and farmers in the south still struggling after Hurricane Michael ravaged their harvests last year.

Democrats believe the failure to reach a compromise on disaster relief funding, one of the few issues in Congress which usually garners bipartisan supports, is rooted in President Trump’s rigid opposition to additional recovery funds for Puerto Rico, which is still reeling from a pair of powerful storms in 2017.

“It is very clear that the the president  is holding a petty political grudge against the American citizens of Puerto Rico. And in that grudge, he is holding disaster aid for all American citizens hostage,” a Democratic Congressional aide involved in negotiations told CBS News.

The president has long railed against the government of Puerto Rico, recently blasting the island’s leaders as corrupt officials who only “complain” and “ask for money.” Citing a misleading claim that Puerto Rico has already received $91 billion in federal aid since Hurricanes María and Irma battered the island in 2017, he has urged Republican lawmakers to oppose any additional disaster assistance to Puerto Rico.

Senate Democrats have accused their Republican colleagues of being beholden to the president by opposing legislation that includes recovery-related aid for the island included in a proposal passed by the Democratic-controlled House in January.

“We cannot and will not pick and choose which citizens to help based on petty, political disputes,” Senate Minority Leader Chuck Schumer, D-New York, and Vermont Sen. Patrick Leahy, the Democrat in the Senate Appropriations Committee, wrote in a statement late Thursday. The pair introduced a $17.2 billion package, their third to date, mirroring one introduced by House Democrats earlier in the week.

Along with allocating more than $500 million to repair Puerto Rico’s damaged water infrastructure, restore its sewers and rebuild its electric grid, the Democrats’ latest package includes $3 billion in funds for those affected by the recent flooding in the Midwest and tornadoes in the South.

This Wednesday, March 20, 2019 aerial photo shows flooding near the Platte River in in Plattsmouth, Neb., south of Omaha. The worst of the flooding so far has been in Nebraska, southwestern Iowa and northwestern Missouri. (DroneBase via AP) / AP

But Republicans have criticized Democrats for introducing proposals they say the president will veto. As of Thursday, the White House only supports $600 million in funding for Puerto Rico’s nutritional program, which has been facing significant cuts since the last hurricane-related funding approved by Congress for the program, which covers more than a third of the island’s approximately 3.2 million U.S. citizens, ran out in late February.

Sen. Rick Scott, R-Florida, the state with one of the largest Puerto Rican communities in the mainland U.S., has repeatedly said Schumer and Senate Democrats are at fault for stalling the much-needed disaster aid for communities across the U.S. After a meeting with the president on Thursday afternoon, however, Scott struck a more conciliatory tone.

“I’m working with Republicans and Democrats to get this done,” he wrote on Twitter. “The people of Florida and Puerto Rico can’t wait any longer.”

A $13 billion GOP-sponsored aid package supported by Scott failed to pass earlier this month, as Democrats in the Senate voiced their opposition, saying the proposal did not have enough assistance for Puerto Rico.

On Thursday, Puerto Rico’s government urged lawmakers to break the stalemate and find some common ground to dispatch more relief aid for the island. “Congress must act swiftly so that our recovery and the wellbeing of millions of Americans in need are not affected by a legislative impasse,” Anthony Maceira, public affairs secretary for Gov. Ricardo Rosselló, wrote in a statement to CBS News Thursday. 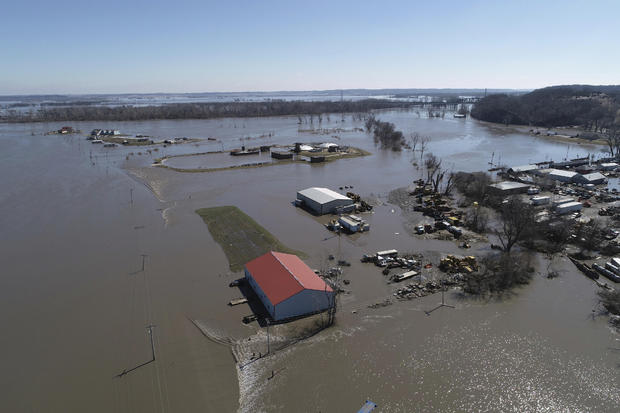 This Wednesday, March 20, 2019 aerial photo shows flooding near the Platte River in in Plattsmouth, Neb., south of Omaha. The worst of the flooding so far has been in Nebraska, southwestern Iowa and northwestern Missouri. (DroneBase via AP) / AP

The approximately 1.4 million Puerto Ricans enrolled in the Nutrition Assistance for Puerto Rico (NAP) — the island’s version of the Supplemental Nutrition Assistance Program (SNAP) — have already begun to face deep food aid cuts. Unlike SNAP, funding for NAP can’t expand to meet increased demand because it is funded through an annual federal block grant of about $2 billion.

According to Javier Balmaceda, a senior policy analyst at the Center on Budget and Policy Priorities (CBPP), the maximum food assistance for a family of four enrolled in NAP has declined from $649 a month to $410. He told CBS News the approval of the proposed $600 in additional funding for the program would allow food benefits to return to their normal levels for another six months.

“It’s been a year and half since the hurricanes hit Puerto Rico but the people are still struggling mightily to recover.” he said. “Many people depend on this aid to access food, which is pretty much a basic need.”