School Board removed graphic novel over language and nude illustration

ATHENS, Tenn. (AP) – A Tennessee school district has voted to ban a Pulitzer Prize winning graphic novel about the Holocaust due to “inappropriate language” and an illustration of a nude woman.

That’s according to minutes from the McMinn County School Board meeting on Jan. 10. Board members voted to remove “Maus,” a graphic novel by Art Spiegelman.

The book was part of the district’s eighth-grade English language arts curriculum.

The board emphasized that they did not object to teaching about the Holocaust but were concerned the work wasn’t age-appropriate.

Although they discussed redacting parts of it, that led to copyright concerns and board members ultimately decided to look for an alternative book on the subject.

STATEMENT FROM MCMINN COUNTY SCHOOL BOARD 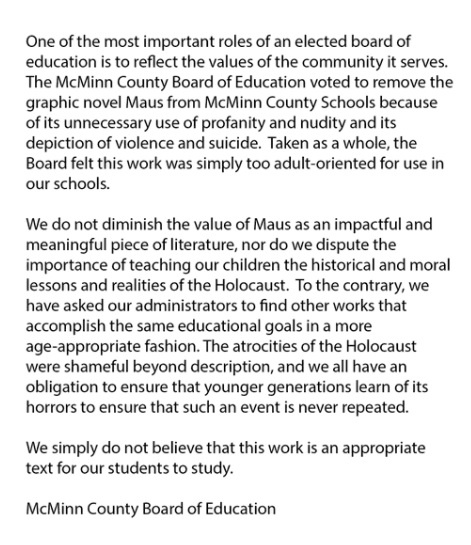 STATEMENT FROM THE JEWISH FEDERATION ON THE BANNING:

The Jewish Federation of Greater Chattanooga is disappointed by the McMinn County School Board’s decision to remove an important work and resource about the Holocaust, “Maus”, from its curriculum. It is imperative that we teach our children about the Holocaust in age-appropriate ways, as outlined in Tennessee’s state standards for Holocaust education. At a time of rising antisemitism, we must be particularly vigilant so that nothing like the Holocaust can ever happen again.

“On International Holocaust Memorial Day, in particular, we must redouble our efforts to ensure the crimes of the Nazi regime are never forgotten,” said Jewish Federation of Greater Chattanooga Executive Director Michael Dzik. “We are in the process of reaching out to the McMinn County School Board and look forward to discussing this issue with them in hopes that they will reconsider their decision.”

Mr. Dzik continued by saying, “The Jewish Federation looks forward to sharing many local and regional Holocaust resources with the McMinn County School Board including Whitwell Paperclips Project, One Clip at a Time, Tennessee Holocaust Commission, and Facing History and Ourselves, to name a few.  We recognize that the Holocaust topic is challenging and difficult but one that is essential in creating informed, educated, caring and thoughtful communities.”

The Jewish Federation of Greater Chattanooga works diligently to educate and fight against antisemitism and all forms of hate.  We create partnerships with civic, business and faith communities to build understanding and respect for all.