Updated at 4:25pm: Chattanooga Police say they have found a car consistent with the description of the one that hit and killed an officer. For more on the investigation, click here.

Hixson, TN (WDEF) – On Saturday at approximately 11:04pm, Chattanooga Police Officer Nicholas Galinger was struck by a vehicle while on duty. The incident occurred on the 2900 block of Hamill Road in Hixson.

Officer Galinger was transported to a local hospital by Hamilton County EMS and later succumbed to injuries sustained in the incident.

Officer Galinger was on a call with his Field Training Officer (FTO) checking a hazard in the roadway. He was out of the patrol vehicle when a vehicle passing by struck him.

Originally from Cincinnati, Ohio, Officer Galinger was 38 years old. He graduated from the Chattanooga Police Department Academy on January 24, 2019.

“The Chattanooga Police Department and this community lost not just an officer,” said Chief David Roddy. “We lost a son, a father, a friend, and a protector.” 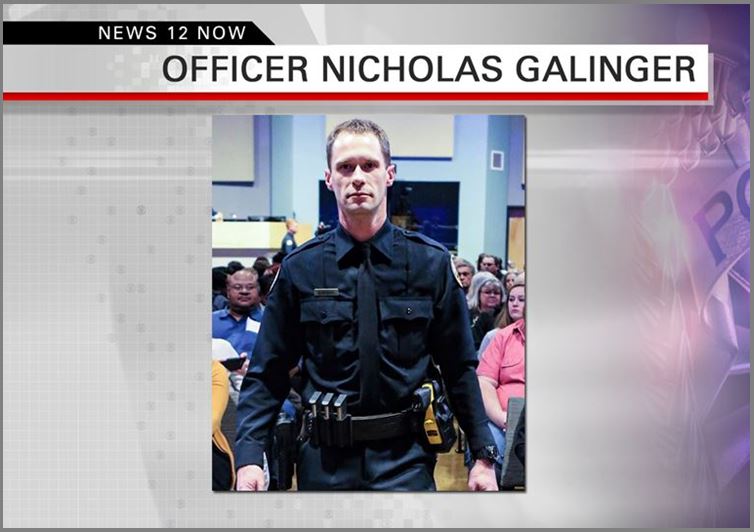 “As Sheriff of Hamilton County I would like to offer our condolences to our brothers and sisters with the Chattanooga Police Department as they mourn the loss of Officer Nicholas Galinger after he passed away from injuries sustained in a hit-and-run on Hamill Road.

Law enforcement is a dangerous career and those who heed the call to serve do so willingly and selflessly. Despite the dangers of the profession, each day men and women across our Nation choose to don the uniform of their local law enforcement agencies to serve and protect. They leave their homes not knowing if they will return. Unfortunately, due to the times we live in, more and more of our dedicated public servants in law enforcement are not returning home.

In the case of last night’s tragic incident, our community, our Nation, lost another brave public servant.

As I am still recovering from knee surgery, I have instructed Chief Deputy Austin Garrett to offer any support and assistance from the HCSO necessary to the men and women of the Chattanooga Police Department during this difficult time.”

Anyone with information regarding this incident, the driver, or the location of the suspect vehicle is asked to call 911, 423-698-2525, or submit a tip via the free Chattanooga PD Mobile app. Tipsters can remain anonymous.

The Chattanooga Police are working with Officer Galinger’s family on arrangements.
—
Press briefing:

Shortly after 11pm, the Chattanooga Police Department Traffic Division responded to the 2900 block of Hamill Road on a Pedestrian Struck / Officer-Involved call.

CPD Officer Nicholas Galinger, 38, was out of his patrol vehicle inspecting a manhole cover when a vehicle traveling northbound on Hamill Road struck the officer and fled the scene.

Officer Galinger was transported to a local hospital and later died from his injuries.

Chattanooga Police ask anyone who recognizes a Honda CRV (2017/2018) with heavy front-end damage to call 423-698-2525, or submit a tip anonymously in the Chattanooga PD mobile app.

The investigation is ongoing and more information will be released when available.