Investigators say she transferred money out of accounts and into hers 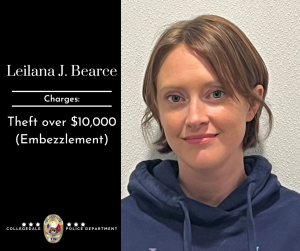 Leilana Bearce has been charged with theft over $10,000.

Investigators say she embezzled more than $47,000 as a teller at Collegedale Credit Union.

The investigation started when a customer reported several transactions in their account that they never made.

They say Bearce took money out of various accounts and transferred them to her family’s accounts, then on to her own.

Credit union officials don’t know how many account holders lost money yet, but they say they will reimburse them all.