Dallas Cowboys superstar running back Ezekiel Elliott will pay for the funeral expenses of a 14-year-old football phenom who was shot and killed at a party last week. Jaylon McKenzie died on Saturday after he was hit by a stray bullet while leaving a party in Venice, Illinois, near St. Louis.

Police said Jaylon and a 15-year-old girl were both struck by gunfire after they left a house where the party was being held. The girl was listed in critical condition Monday.

ESPN reports the tragedy struck a personal tone with Elliott, who grew up in St. Louis, and that he reached out to the McKenzie family when he learned of the story. The Cowboys confirmed Elliott’s gesture and said he plans to keep his communications with Jaylon’s family private.

Ezekiel Elliott of the Dallas Cowboys on August 25, 2016 in Seattle, Wash. Getty

According to CBS affiliate KMOV-TV, Jaylon’s mother, Sukeena Gunner, said her son was trying to avoid a fight when he left the party. He was taken to a hospital in Granite City, Illinois, where he died of his wounds.

Despite not yet being in high school, Jaylon’s talent was so remarkable that he was featured in the November 2018 issue of Sports Illustrated in an article titled “Six Teens Who Will Rule the Future of Sports.”

“Jaylon—who plays running back, receiver and defensive back—drew national attention when he caught five passes for 161 yards and two touchdowns to help the East team to a victory at the NFL’s 8th Grade All-American Game in Canton, Ohio, in August,” the article said. “Jaylon expects to be playing in the NFL. His dream? To be a star in L.A.—for the Rams or the Chargers.” 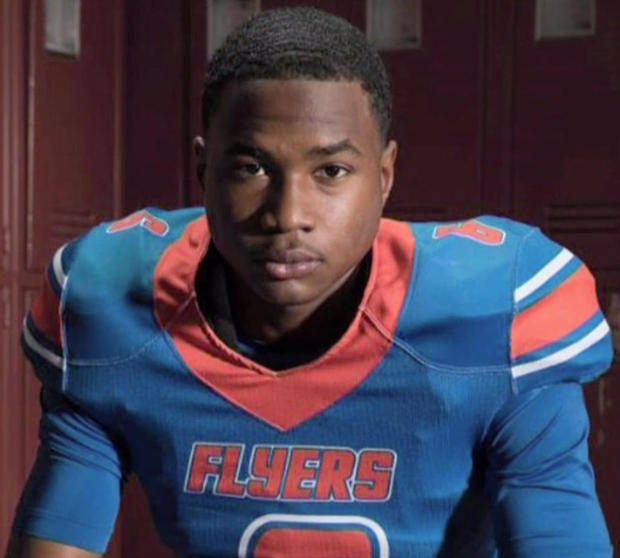 A photo of 14-year-old football phenom Jaylon McKenzie provided by his mother.  KMOV via Sukeena Gunner

The Illinois State Police said in a statement to CBS News it was assisting in the investigation of the shooting.