GUATEMALA CITY — One of Central America’s most active volcanos erupted in fiery explosions of ash and molten rock Sunday. At least six people were killed and 20 injured as a towering cloud of smoke blanketed nearby villages in heavy ash.

National Disaster Coordinator Sergio Cabanas said an undetermined number of people were missing following the eruption of the Volcan de Fuego, Spanish for “volcano of fire,” which lies 27 miles from Guatemala City.

Cabanas said four people, including a disaster agency official, died when lava set a house on fire in El Rodeo village, and two children were burned to death as they watched the volcano’s second eruption this year from a bridge.

Guatemala’s disaster agency said 3,100 people had evacuated nearby communities, and the eruption was affecting an area with a population of about 1.7 million people. Shelters were opened for those forced to flee. 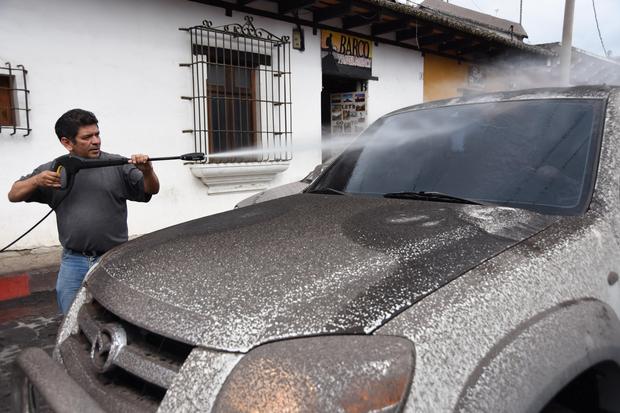 A man cleans ashes from the Volcan de Fuego off his car in Antigua Guatemala, Sacatepequez department, southwest of Guatemala City on Sun., June 3, 2018.

Ash was falling on the Guatemala City area as well as the departments of Sacatepequez, Chimaltenango and Escuintla, which are in south-central Guatemala around the volcano. Streets and houses were covered in the colonial town of Antigua, a popular tourist destination.

Aviation authorities closed the capital’s international airport because of the danger posed to planes by the ash.

The conical Volcan de Fuego reaches an altitude of 12,346 feet above sea level at its peak.