FORT PAYNE, Alabama (WDEF) – The DeKalb County Sheriff is warning the community about a rash of suicides that have hit the northeast Alabama community.

Sheriff Nick Welden reported on Thursday that his officers worked three more cases in the last 24 hours, bringing the total of suicides to five in the last week.

They also responded two a pair of other suicide attempts on Thursday.

“It saddens us that so many of our citizens have found themselves at the point in life that they feel they need to end it. No matter how bad things get, it can get better. You just have to keep going” says the Sheriff.

The Sheriff is asking the community to check on friends, neighbors, and loved ones who may be having a hard time or have withdrawn from others.

He says letting them know that someone cares may save their life.

“These incidents not only take a toll on the families and friends involved, but also our deputies and investigators. Each incident has to be thoroughly investigated. We wish that there was more we could do to prevent them instead of investigating the aftermath,” he said.

Sheriff Weldon is also sharing how people can reach out for help.

You can also visit http://suicidepreventionlifeline.org for more information or a live chat with a counselor. 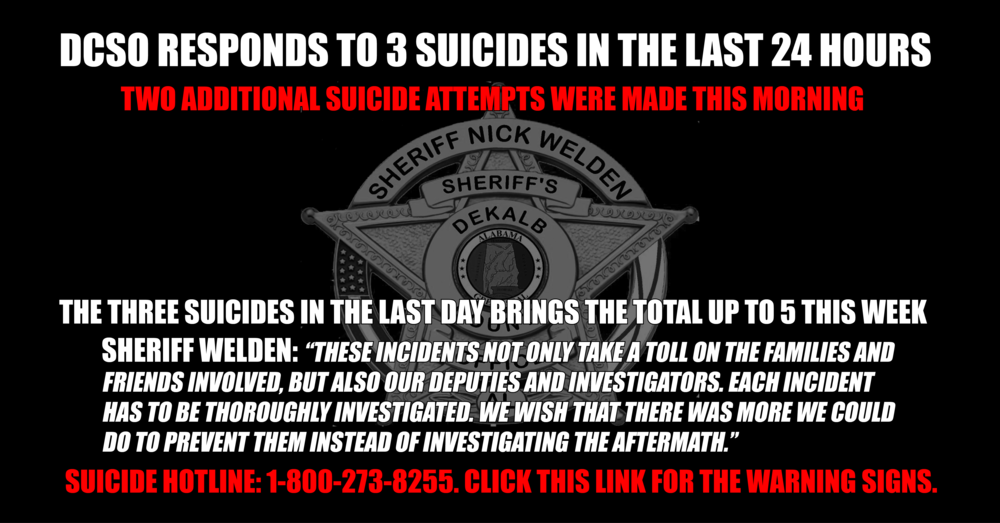 The American Foundation for Suicide Prevention also lists the following warning signs to spot if a friend or loved may be considering suicide:

If a person talks about: