While the dangers of children accidentally ingesting batteries and laundry detergent pods are well known, doctors are sounding the alarm on the risks of another common household item: tiny, high-powered magnets. Federal safety officials tried to ban them several years ago, but they’re now back on the market and raising concerns of more injuries.

Dominic and his mom Stephanie Harwell

His friends brought them to school to as a toy. “I was just messing around and put them in my mouth to make it look like I had a lip piercing,” he told CBS News. “Then they stuck together really quick and went down my throat.”

He told the school nurse who then phoned his mom.

A registered nurse in the pediatric emergency department at the Johns Hopkins Children’s Center, Harwell was concerned and made a few phone calls herself.

“I knew about the risks of swallowing batteries, but couldn’t remember if I’d heard warnings about magnets,” she said. “I was told one magnet wasn’t so bad but if he had swallowed two I’d need to bring him in right away.”

Ultimately, Dominic was lucky. After a few tests that determined he wasn’t in imminent danger, he passed both magnets with no complications. 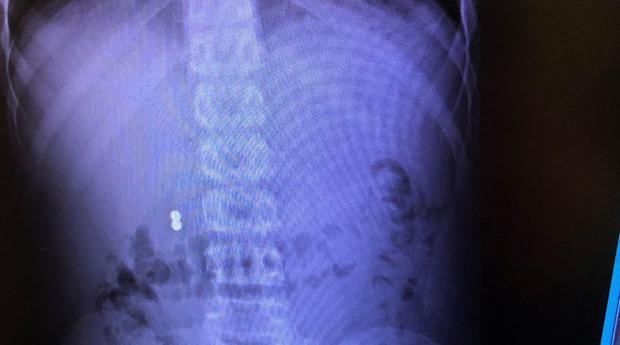 The dangers of swallowing magnets

For other families, the outcomes have been worse. While swallowing a set of any magnets can be dangerous, safety experts are particularly concerned about high-powered rare earth magnets.

These magnets began being produced in the 1980s but started popping up in both children’s toys and, more commonly, as desktop toys for adults meant to stave off boredom, in the early 2000s. They are sold under names like Buckyballs, Zen Magnets, and Neoballs and are 5 to 10 times stronger than traditional refrigerator magnets.

Concerns over such magnets were first brought to light by the U.S. Consumer Product Safety Commission (CPSC) in 2012.

The agency cited the case of a 3-year-old girl in Oregon who swallowed 37 Buckyballs. At first, her parents thought she had the stomach flu, but an X-ray revealed a circular chain of magnets in her stomach. In the end, the magnetic balls snapped girl’s intestines together, ripped three holes into her lower intestine and one hole into her stomach.

In another instance, a 6-year-old swallowed 19 magnets, causing ulcerations in her stomach and leaving two small holes in her bowel.

CPSC also blames high-powered magnets for the death of a 19-month-old girl and estimates there were about 2,900 emergency room-treated injuries related to the magnets between 2009 and 2013.

The real danger comes when more than one of these magnets are swallowed, or one magnet and any other piece of metal.

“They can go through the esophagus into the stomach and GI [gastrointestinal] tract,” explained Dr. Amyna Husain, a pediatric emergency medicine physician at Johns Hopkins Children’s Center. “If you have two magnets in different parts of the tissue and they attract each other, the tissue between the two can get pinched off and you lose blood circulation.”

This can cause a tear in the bowels that could lead bacteria spilling into the abdomen and cause serious infections. In the more severe cases, patients may need to have parts of their intestines surgically removed.

CPSC issued a ban on high-powered magnet sets in 2014 but it was overturned in court two years later.

“We’re worried about seeing more of these cases now that they’re back on the market,” Husain said.

“As pediatricians we always want to keep younger children safe from putting anything in their mouths. If there’s any of these magnets that you know are in the house, be aware keep them out of reach, or not even in the house if they don’t need to be,” Husain said.

She advises parents to be aware of any magnets that could be contained within their children’s toys. “If these break, the magnets can then be swallowed by children so be aware of that risk,” she said. “For ones that are not encapsulated by toys, keep them out of reach or not even in the house if you don’t need them to be.”

She also recommends talking to pre-teens and teenagers about the risks. “Of all the risks we want to talk to our kids about, it’s such a simple thing to make them aware that these things could cause serious injury and to keep them not only away from their mouth but any other opening of the body. And if they are accidentally ingested, they should take it seriously and let someone know right away so they can be brought to the emergency room to be evaluated immediately.”

Harwell says she hopes other parents will realize the risk these magnets pose. Her son Dominic also hopes to spread the word.