CHATTANOOGA, Tenn. (WDEF) – Rising egg prices around the nation are being felt here right in Chattanooga.

The U.S. Department of Agriculture says that between December 2021 and December 2022, egg prices rose by 59 percent.

This rise is not sunny side up to the average consumer but can be the thin line between profitability or not for business owners.

A poultry expert says that the future of egg production is going to be scrambled, leading to a bumpy road for those who depend on eggs.

Megan McClain, the owner of the Northshore cookie shop, The Chattanooga Cookie, said, “When we opened, our initial order for the restaurant, eggs were 17 cents each. And in the last order I placed, eggs were 45 cents each.”

This cookie shop, which opened last July, has seen the price of eggs nearly triple.

McClain says trying to find lower prices for eggs is taking away from other items of business she wants to focus on for The Chattanooga Cookie.

She says “To keep our food costs down is a priority, and it just comes at the expense of these other things you are able to put on the back burner. As a new business you want to be up front, you want to do as much as you can at the beginning. You want to hit the ground running, and sometimes you just can’t do that and focus on keeping your prices.”

It is not just the price of eggs causing issues for bakers like McClain. She said “We’re just trying to not lose our entire profit margin. In addition to eggs, butter has gone up, a little bit of everything has gone up.”

Tom Tabler, a professor and poultry expert at the University of Tennessee in Knoxville, says that the avian flu primarily behind the major rise in prices is likely not going away anytime soon.

Tabler said “There wasn’t a week go by that some state, somewhere did not have an outbreak in a backyard flock, or commercial flock or something. The virus has changed enough that it’s learned at least to some degree to do a little better job of surviving in hot weather than what it could before.”

He says the outbreak has killed over 50 million birds and compromised five percent of the United States’ egg production.

He does say that egg producers are working to restore that lost population and expects prices to fluctuate.

Tabler says “I do think they will go down probably in the not-too-distant future, in part because the main Christmas/Thanksgiving baking season is over, and we’re not quite to the point where we see the Easter holiday season baking on the horizon yet.”

She says, “Eggs are such a common and essential ingredient to a lot of bakery items. It’s not like you can find a substitute. It’s just one of those things you have to grin and bear it and hope prices go down in the future.”

She says despite having to spend more on product, they have not risen their prices and are planning to build a second location citing success so far.

Other business owners I spoke with off camera said they’ve seen a large increase as well, with one restaurant owner telling me it’s nearly a hundred dollars for 15 packs of a dozen eggs.

Tabler encourages those who owns chickens on their farms or in their backyards to keep them away from unfamiliar birds and exercise caution about letting other people come visit them at this time.

Although humans cannot get the disease, he says the disease can travel on our clothes and if it infects your birds, the fatality rate is 90 to 100 percent. 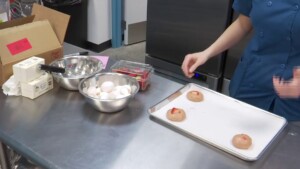