Eggnogs, candy canes and wreaths: The stories behind our Christmas traditions

(CNN) – The trees are decorated, the wreaths are hung and now it’s about time to start laying out milk and cookies for Santa.

There are so many traditions we’ve come to depend on during the holidays, but ever wondered where they came from?
Now you’ll know.

Did Coca-Cola invent the modern-day Santa? 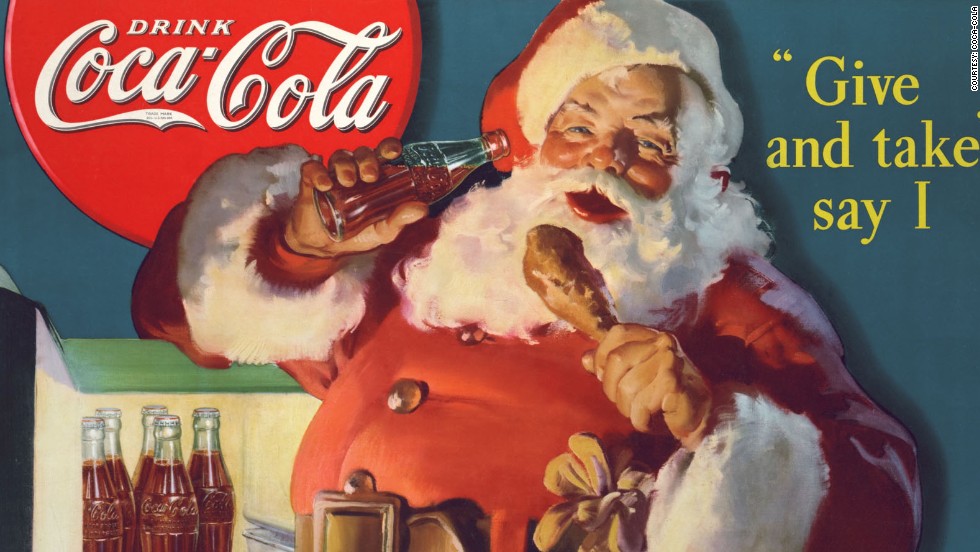 Nope, this one’s a myth. Although Coca-Cola started using Santa in their advertising in the 1930s, the company didn’t come up with the image of the plump old man in his signature red and white. It just so happened that Santa’s red suit and white beard matched the brand’s colors.
The modern-day image of Santa has been evolving for centuries. Modeled after Saint Nicholas who had a reputation for secret gift-giving, Santa was eventually shaped into the sleigh-riding, chimney-climbing man we know today, through the work of people like Washington Irving and illustrator Thomas Nast.
Nast’s 1881 “Merry Old Santa Claus” largely formed the basis for today’s Santa. In that image, Santa appears in the classic red and white suit with a big belly to boot.

Where do candy canes come from? 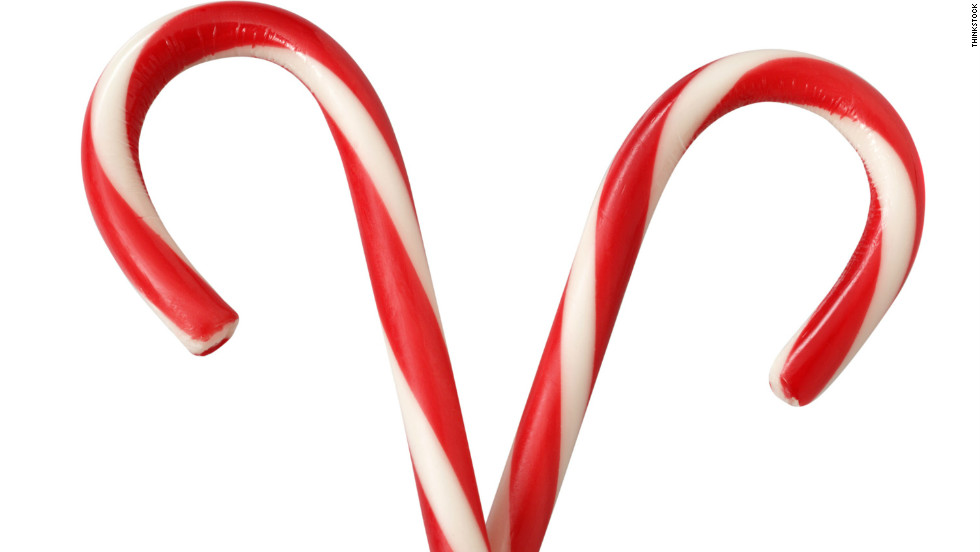 This is one of those traditions that we’re not too sure about. One story goes that a German choirmaster in 1670 was worried about children being disruptive during long church services, so he went to a candy maker for sticks of white sugar to keep them quiet. To give the candy an educational slant, the choirmaster asked the candy maker to make the sticks in the shape of a cane so that the kids would remember the story of the shepherds who came to visit baby Jesus. However, all the references to this story are anecdotal and there are no real records to prove it’s actually true.
What we do know is that in 1919, Bob McCormack started making candy canes in Georgia and eventually became one of the world’s leading candy cane producers. Since manually shaping candy canes into their traditional ‘J’ shape was inefficient and labor-intensive, McCormack’s brother-in-law, a Catholic priest named Gregory Keller, invented the Keller Machine to automate the process of shaping straight candy sticks into today’s J-shaped candy canes.
READ: Strangest Christmas traditions around the world

Why do we drink eggnog? 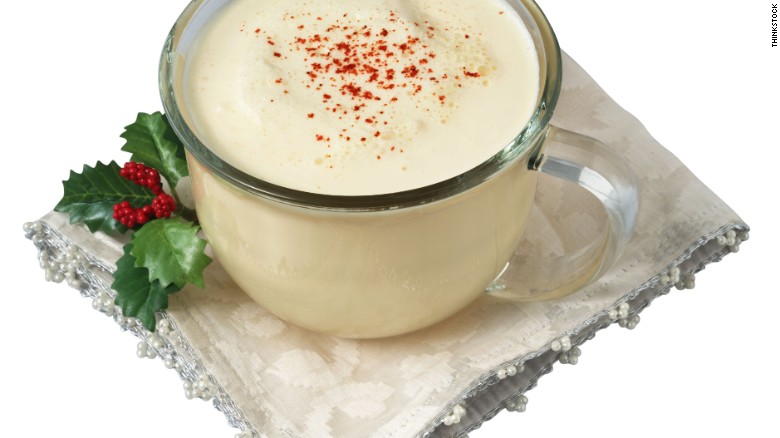 Most culinary historians agree that eggnog stems from a medieval British drink called “posset,” a thick, boozy, ale-like concoction seasoned with whatever spices were on hand. As the milk, eggs and sherry used to make posset were foods of the rich, the drink was used in toasts to prosperity and good health.
Eggnog became a holiday tradition when it was brought over to the American colonies, where cows, chickens and rum were much more accessible. As for the name? The term “nog” referred to a certain type of strong, English beer, while a “noggin” was a small cup intended for brewing nog.

Why do we put up Christmas trees? 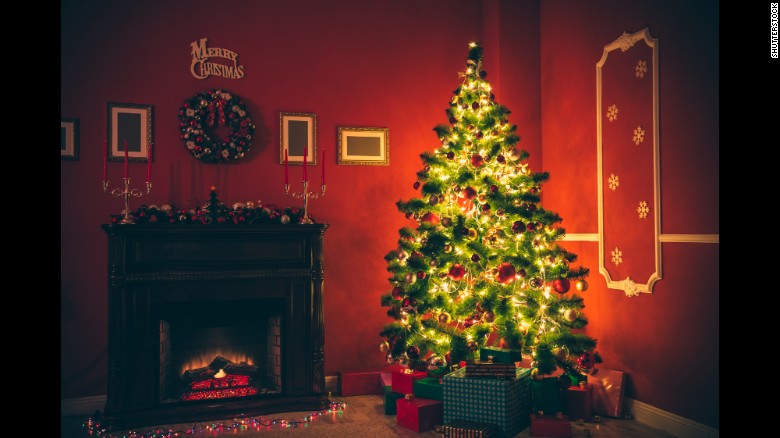 There are a few different stories behind the origin of the modern-day Christmas tree, although not all are rooted in fact. Evergreen trees were actually used by pagans in winter festivals for thousands of years. During the winter solstice, evergreens signified the coming of spring. As Christianity spread throughout Europe, the trees began to be used as a symbol for Christmas. In mystery plays in Germany, they were often used as props, garnished with apples to represent the Garden of Eden.
One legend credits 16th century Protestant reformer Martin Luther for bringing the Christmas tree into homes. Luther was supposedly walking through the forest on the night before Christmas when he looked up to see stars shining through the tree branches. He was so dazzled by the sight that he told his children it reminded him of Jesus and then erected a tree in his own home.
But it wasn’t until the mid-19th century that the Christmas tree as we now know it became custom. England’s Queen Victoria encouraged her husband Prince Albert to decorate a tree as he had back at home in what is now Germany. When a drawing of the royal family with their exquisite Christmas tree appeared in a London newspaper, the tradition became also became popular throughout the UK and US.

Why do we hang wreaths on our doors? 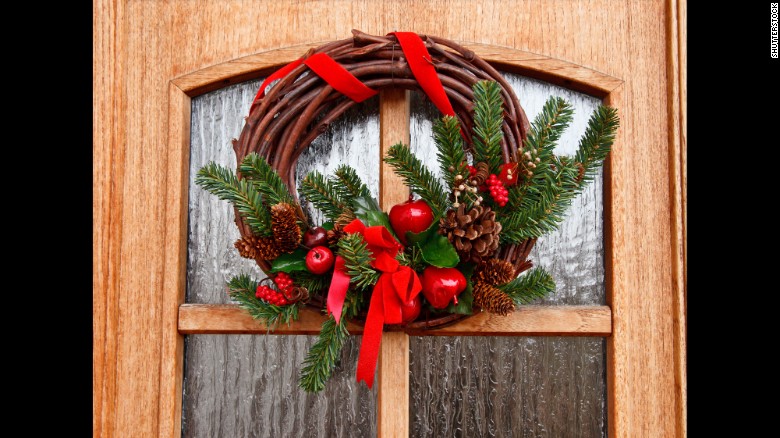 In ancient Rome, people would exchange evergreen branches during New Year’s celebrations to wish each other good health. The Romans eventually began bending these branches into a ring and displaying them on doorways, which symbolized both victory and eternal life.
The wreath later became a Christian symbol for the body of Christ. In holly wreaths, the sharp, pointed leaves represented the crown of thorns worn by Jesus on the cross and the small, red berries symbolized drops of blood. Evergreen wreaths embodied eternal life. For some Christians, hanging a wreath in the doorway has been an invitation for Christ to enter one’s home. But today, people mostly hang wreaths on their doors because they’re festive, pretty and well, because it’s tradition.
**Photo via CNN
Tags: Christmas, CNN, WDEF