SpaceX founder Elon Musk showed off a towering prototype of his next-generation stainless steel “Starship” Saturday, telling a throng of reporters, cheering supporters and company workers the gleaming rocketships could begin piloted orbital test flights within the next year.

“With any development into uncharted territory, its difficult to predict these things with precision,” the tech billionaire said in a question-and-answer session. “But I do think things are going to move very fast.”

The futuristic-looking Starship, intended to carry passengers and cargo to Earth orbit, the moon and eventually Mars, is the upper stage of a fully reusable launch system featuring a “Super Heavy” booster powered by up to 37 methane-burning Raptor engines.

In its final form, Musk said the Super Heavy ideally will generate more than twice the 7.5-million-pound thrust of NASA’s legendary Saturn 5 moon rocket, still the most powerful operational launcher ever built.

The Starship, powered by six Raptor engines, requires the Super Heavy booster to reach orbit. But assuming an ability to refuel the spacecraft in space, on the moon or Mars, a Starship could return to Earth on its own with a powered landing, ready for refurbishment and reuse.

Likewise, the Super Heavy booster is designed to fly itself back to the launch site after boosting a Starship — and up to 150 tons of cargo — into orbit.

Standing nearly 400 feet tall, the Super Heavy/Starship vehicle eventually will replace SpaceX’s entire fleet of Falcon 9 and Falcon Heavy rockets, Musk said, along with the Crew Dragon spacecraft the company is building for NASA to ferry astronauts to and from the International Space Station.

While it sounds like science fiction, two full-scale Starship prototypes are under construction, one in an industrial park near the Kennedy Space Center in Florida and the other on the south Texas coast near Brownsville, the location Musk chose to make his presentation.

The Texas rocket, known as the Mark 1, is further along and will be the first to fly, Musk said. Equipped with just three engines for initial test flights, the plan calls for a climb to an altitude of about 12 miles and a powered descent to a tail-first touchdown near the launch pad.

“This thing is going to take off,” he said of the Mark 1, “fly to 65,000 feet, about 20 kilometers, and come back and land in about one to two months. So that giant thing, it’s going to be pretty epic to see that thing take off and come back … It’s wild.” 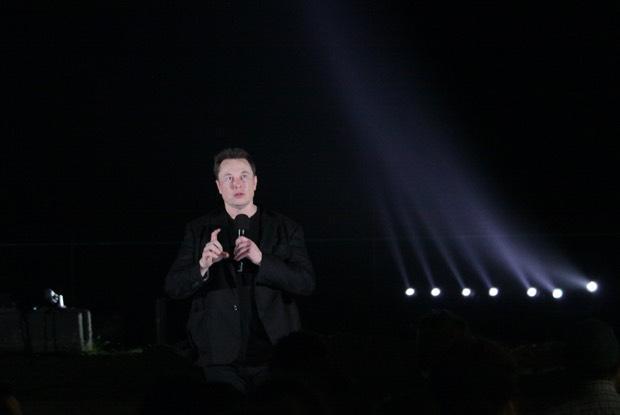 The next flight after that, he said later, “might actually just be all the way to orbit with a booster and the [Star] ship.”

But not using the Mark 1. The first orbital flight likely will be carried out by the third or fourth Starship prototype. Construction crews in Texas will begin building the Mark 3 “in about a month.”

“The rate at which we’re going to be building ships will be quite crazy by space standards,” he said. “This is going to sound totally nuts, but I think we want to try to reach orbit in less than six months.”

Asked when the first people might take off aboard a Starship, Musk said it might be possible within the next year.

“It’s designed to be a reusable rocket, so we can do many flights to prove out the reliability very quickly.” 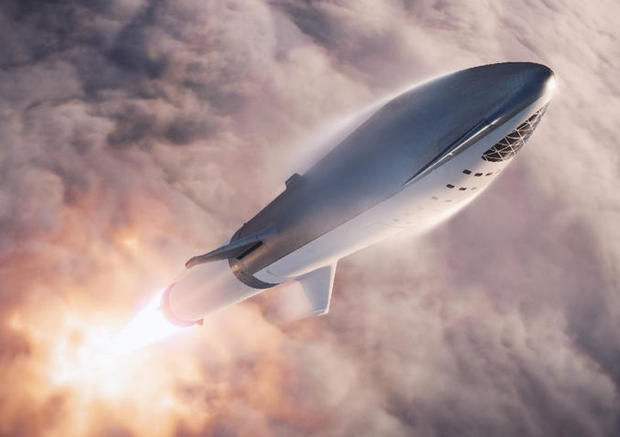 An earlier artist’s impression of a Starship and Super Heavy booster climbing out of the lower atmosphere on the way to orbit. SpaceX

Driving to the desolate south Texas launch site along a two-lane road, visitors can catch a glimpse of the prototype Starship from more than eight miles away as its stainless-steel skin reflects the glare of the Texas sun like a distant lighthouse.

SpaceX engineers and contractors assembled the 164-foot-tall Starship outdoors near the hamlet of Boca Chica, just a stone’s throw away from the highway and two miles or so from beaches on the Gulf of Mexico.

Security guards tolerate passers by who cannot resist pulling to the shoulder to take snapshots of the huge rocket, surrounded by cranes and work crews who attached the nose section and steering fins last week. The rocket will be moved to a nearby launch pad for the upcoming test flights.

But the prototypes are just that, and they do not yet include the life support and control systems that would be needed by an operational rocket intended to carry passengers or astronauts. Musk downplayed those issues, saying the technology for regenerative life support systems and other critical components is readily available, or soon will be.

But he repeated earlier claims a Starship could carry up to 100 people in its 1,000-cubic-meter pressurized nose section. The International Space Station, which has a similar pressurized volume, normally carries a crew of six.

Questions aside, the Starship’s development has generated widespread interest, in part because of the vision Musk paints in his presentations and tweets describing launch systems that, compared to traditional designs, seem more cutting edge and innovative.

His latest update comes at a time when NASA and Boeing are struggling to finish the first Space Launch System heavy-lift rocket, the giant booster the agency plans to use to send astronauts back to the moon in 2024 as part of the Artemis program.

The SLS, years behind schedule billions over budget, is not expected to make its first unpiloted test flight until 2021. Development of commercial crew ferry ships being built by Boeing and SpaceX to carry astronauts to and from the International Space Station also is lagging due to earlier funding shortfalls and technical issues.

In a tweet Friday, NASA Administrator Jim Bridenstine acknowledged the widespread interest in Musk’s Starship update, saying “I am looking forward to the SpaceX announcement.”

But, he added, “in the meantime, commercial crew is years behind schedule. NASA expects to see the same level of enthusiasm focused on the investments of the American taxpayer. It’s time to deliver.”

Some interpreted the tweet as questioning whether SpaceX is devoting the necessary attention to the commercial crew program given ongoing problems with the Crew Dragon spacecraft. NASA is counting on the Boeing and SpaceX crew capsules to end the agency’s sole reliance on Russian Soyuz spacecraft for rides to the space station. 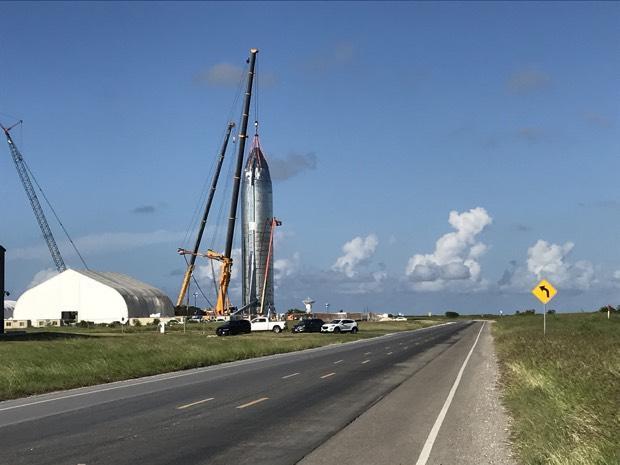 The Starship Mark 1 under construction at SpaceX’s Boca Chica, Texas, launch site. Launch and landing pads will be built about a mile down the road toward the Gulf of Mexico. William Harwood/CBS News

But Musk said Crew Dragon is the No. 1 priority for SpaceX, adding that Starship development amounted to only about 5 percent of the company’s workforce and resources.

In the meantime, crews in Florida and Texas are engaged in an informal competition to outperform each other building and launching Starship prototypes.

“The priority is to build at least two Starships at each site, at Boca and at the Cape, and then to start building the booster,” Musk said. “We’ll complete Mark 1 through 4 before doing Mark 1 of the booster. And then we’ll do Mark 1 and Mark 2 of the boosters at the Cape and at Boca.”

One challenge will be building enough Raptor engines. It currently takes eight to 10 days to build a single engine, he said, but SpaceX hopes to improve that to one per day next year. Between now and the first orbital flight, Musk said about 100 Raptors will need to be built.

In Florida, the Super Heavy and Starship will be launched from complex 39A at the Kennedy Space Center. SpaceX has a 20-year lease on the former Apollo and shuttle pad and plans major modifications to accommodate the new rocket system.

In Texas, the company plans to launch from new facilities at the Boca Chica site. Along with launch and landing pads, the company likely will build a plant to generate the needed liquid oxygen propellant.

While local and state officials have welcomed SpaceX to Texas, residents of Boca Chica face an uncertain future given their proximity to rockets blasting off almost on their doorsteps. As it is, they face the prospect of broken windows — or worse — if problems develop during a launch.

SpaceX has offered to buy nearby homes at three times their market value, but it’s not yet clear how many resident might be willing to sell or whether any who refuse could ultimately lose their property through eminent domain.

“We are working with the residents of Boca Chica Village because we think over time, it’s going to be quite disruptive,” Musk said Saturday. “I think the actual danger to Boca Chica Village is low, but it’s not tiny. We want super tiny risks. Probably over time it would be better to buy out the villagers, and we’ve made an offer to that effect.”