He died Sunday after doing his Saturday night show in Tulsa, Oklahoma

Collins Parker,
TULSA, Oklahoma (WDEF) – Former News 12 Meteorologist Clint Boone died suddenly on the job Sunday night in Tulsa.
Clint worked in Chattanooga from 1997 to 2000.
He was born and educated in the state where he would later return to.
Barnes had just begun a new job in January at KOTV.
He had worked in the Tulsa market for the last several years.
Clint is survived by his parents, a daughter (who was born in Chattanooga) and son and two grandchildren.
His daughter posted that he passed away just hours after completing his Saturday night show. 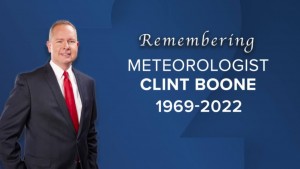