(CHATTANOOGA) – Ten years ago, the Riverbend scored a big homecoming show to close out that year’s festival.

In the previous two years, American Idol made her a star and she had just recorded her first album.

So her 2012 homecoming as a Riverbend headliner was a triumphant return. 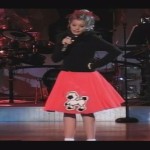 We start with a Friday preview of the show, that includes a clip of Lauren performing in Sevierville as a little girl.

Then we see her greeting fans before the show on Saturday night, and a fan clip from the show where she gets to play with her dad on stage.

You can see the full performance clip from me mainor on YouTube here.