CHATTANOOGA (WDEF) – This was a big week for Chattanooga 35 years ago.

In back to back days, Hamilton Place Mall officially opened to customers and local leaders broke ground on the Tennessee Riverwalk project.

On August 5, 1987, CBL held the grand opening for their new, flagship mall at the Shallowford Road exit of I-75.

Before the mall was built, the area was just pastures and homes.

All the retail and restaurants we have now on Gunbarrel and Shallowford came along after the mall opened.

In fact, some people in the area predicted the mall would never work because it was so far away from downtown Chattanooga.

But from the first day, you can tell that shoppers were ready for Hamilton Place. 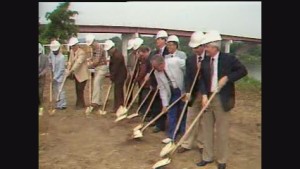 The very next day, city and county leaders gathered on the banks of the Tennessee River to break ground for a new kind of park.

It would run 13 miles from Chickamauga Dam into downtown Chattanooga.

It took them 2 more years to actually open the first leg of the bike, walking, fishing and picnic trail along the River.

And we are still working on it today, now stretching it to the base of Lookout Mountain and across Broad Street into Southside and St. Elmo neighborhoods.