From The Archives: Honey Alexander

MARYVILLE, Tennessee (WDEF) – We remember a First Lady of Tennessee who passed away on Sunday at the age of 77.

Honey Alexander may be best known as the wife of Tennessee politician Lamar Alexander.

But her own love of politics pre-dated meeting her husband.

And she left quite a mark of her own, particularly on the well-being of children.

Leslee Kathryn Buhler was actually born in Los Angeles. But her older brother called her Honey, and that’s that name that stuck.

Her family moved to Texas, where she grew up.

She went to Washington to work for Texas Senator John Tower.  And that’s where she met Lamar, who was working for Senator Howard Baker, Jr. They met at a Senate staffer softball game and were married 18 months later.

That marriage lasted 53 years.  It took the political couple to the Governor’s Mansion in Nashville, to Knoxville to lead UT, back to Washington where Lamar served as Secretary of Education and the U.S. Senate.

Honey also campaigned for her husband when he ran for President in 1996, even though she told reporters she did not want to be First Lady.

She and her husband also took a year off and moved their kids to Australia for a year, just to get away from it all here.

Honey Alexander made her mission as Tennessee’s First Lady focusing on the rights and health of children in the state (She raised four kids of her own).

Those issues brought her to Chattanooga several times, including multiple visits to Siskin and Orange Grove.

She also formed two successful businesses in her life… Blackberry Farm and Corporate Child Care Inc., which eventually became one of the world’s largest child care providers at work.

And you can still find the Honey Alexander Center in Nashville, home for their Family & Children Services. 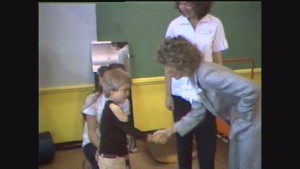 Honey Alexander at Siskin in 1983