ATLANTA (WDEF) – Gov. Brian Kemp will certify the election results because he is required to by law.

But in a Friday evening news conference, he said he is not happy about it.

“It’s quite honestly hard to believe that during the audit, that thousands of uncounted ballots were found in a razor-thin outcome in a presidential election.  This is simply unacceptable.”

He notes that the recount only looked at the actual ballots, not the signatures on the envelopes.

The Governor is calling for the Secretary of State to review the signatures to make sure they match.

Critics say that could weed out fraudulent or fake votes that were cast.

But despite the criticism, Secretary of State Raffensberger has defended the signature verification process on the ballots.

Raffensberger has submitted a final vote count for the Governor to certify which shows Joe Biden winning the state by more than 12,000 votes.

The Republican says he believes the numbers are correct.

Gov. Kemp this evening also called on future legislation to tighten up photo ID requirements on mail in ballots.

He adds that certifying the vote will clear the way for the President’s team to take further legal action.  All of his lawsuits so far over the Georgia vote have been tossed out by judges.

President Trump has attacked Governor Kemp for not cracking down on the Republican Secretary of State. This was his tweet this afternoon. 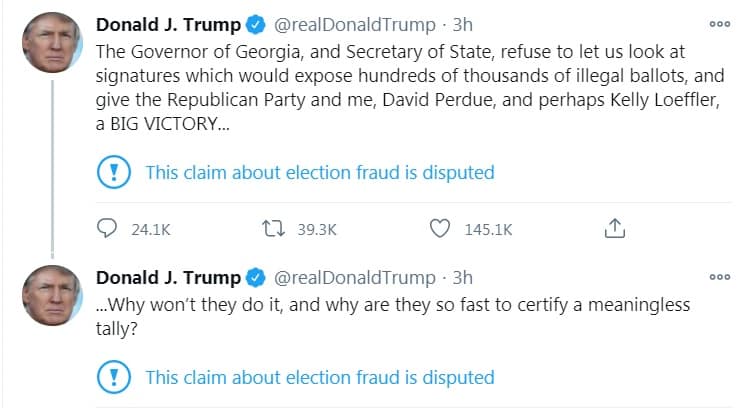 Kemp, himself, was the Secretary of State just two years ago.

He was questioned at the time for overseeing his own election for Governor, in which he narrowly defeated Stacey Abrams.