"fake" gun in McMinn County, real one at Howard 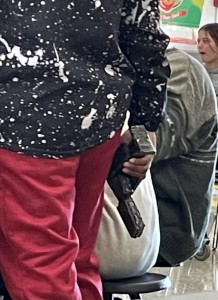 The Sheriff in McMinn County is reporting a “simulated” handgun found on a student.

The SRO got tipped that the student was showing off the firearm in the cafeteria at McMinn County High.

A student sent a photo of it to their parent.

“Upon investigation, the student was located with a piece of solid metal fabricated so as to appear to be a handgun, which the student was pointing at or showing to other student, causing some alarm,” Said Sheriff Joe Guy.

“SROs took the item into custody.”

Even though the gun wasn’t real, the student will still be charged.

“The Sheriffs Office and our School System shares the same concern for the safety of our students,” added Sheriff Guy. “Any threats or disruption to our schools or the school environment will always be taken seriously.”

CHATTANOOGA (WDEF) – The gun found this morning at Howard High was real enough.

The School Resource Deputy recovered the weapon from a student in the hallway around 11:15 AM.

The student was charged with Possession of a Weapon on School Property.

Safety is the highest priority for Hamilton County Schools. Earlier today, the School Resource Deputy assigned to The Howard School recovered a firearm from a student.  The student was transported from the school by the Hamilton County Sheriff’s Office, and charges are being filed. Appropriate school disciplinary action will be taken.