What does a guy who is worth (according to all the magazines) $41 billion do?  If you’re Steve Ballmer, who at age 63 ranks as one of the wealthiest people in the world, he buys the Los Angeles Clippers basketball team, which he cheers on in his familiarly exuberant style.

The team has yet to win a championship. “I think our team plays with a lot of grit, lot of excitement, lot of toughness, hardcore, you know?”

Ballmer is used to swimming against the stream. He grew up in Detroit, his Dad a Swiss immigrant who never finished high school. Ballmer took a risk in 1980 and dropped out of business school to help an old friend from Harvard undergrad with his fledgling software company: Microsoft. The friend, of course, was Bill Gates 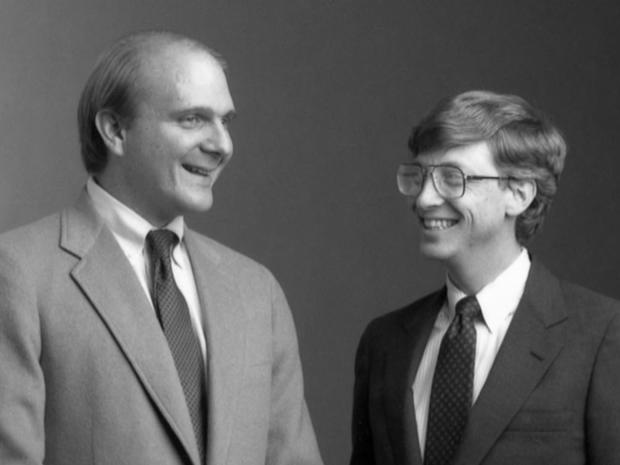 Ballmer said, “I wanted to work in a business that seemed to be rapidly changing because I have a little bit of ADD, if you will, in my personality. And I wanted to work for somebody who I believed was really smart.”

Ballmer became Microsoft’s 30th employee, put in charge of sales and business development. He struck a shrewd deal that ultimately gave him almost 9% of the company..

It was the dawn of the personal computer era, as Microsoft launched revolutionary operating systems like Windows 95. And in 2000, Gates named Ballmer to replace him as CEO. Ballmer’s high-spirited antics at company meetings are still legendary.

To watch a very sedate Steve Ballmer click on this video player below:

As CEO, he helped make Microsoft one of the leaders in selling software systems to large corporations. But acknowledges he was late to steer the company into the search and smartphone markets.

Ballmer retired in 2014, but figuring out what to do after Microsoft was not so easy. “I went a little manic,” he said. “I played 100 rounds of golf; I was good, too, at that time. And then after a year … ‘Okay, breathe …’ That’s when I really took back control of my time.”

Time is a prime commodity for Ballmer, who for years has been keeping spreadsheets to track how he spends every minute from nine to five. He showed Braver his estimated of how many hours a year he spends on the Clippers (366!).

But his wife of 29 years, Connie Ballmer, thought he should start spending more time on philanthropy. She’d been directing the couple’s efforts aimed primarily at creating opportunity for kids in need, and the Ballmers rank among the nation’s most charitable donors.

She told Braver, “So, Steve said – he was being a little controversial – ‘Ah, philanthropy, why do we need to do philanthropy? Why don’t we let the government just give away the money and take care of these people?’ I said, ‘Really?’ And of course I challenged that. Which got him thinking, ‘Hey, I wonder what the government spends its money on? I’m gonna find out.'”

And when he couldn’t find out immediately, that was when the idea of USAFacts.org was born.

USA Facts is a free, non-partisan website that is trying to provide one-stop access to all government data. Launched just two years ago, and headquartered outside Seattle, near Ballmer’s home, he has spent nearly $30 million dollars on it so far.

He showed Braver data on the money spent on Americans’ healthcare: 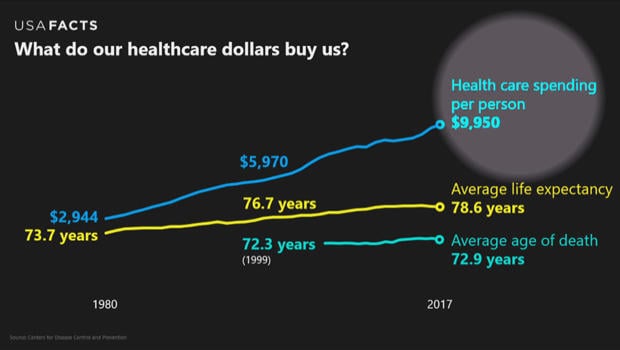 Ballmer hired a team of young computer hot shots to help unearth information, like how much different income groups pay in taxes. Braver asked, “You are obviously in the top 1% of the top 1%. Do you feel like people at that level are paying enough taxes?”

“I am non-partisan. Do I feel like I have an obligation to give back to society? I’d say ‘Yes.’ Society has to decide on policy. If the policy is ‘Let’s tax the more affluent people more,’ okay, I’m good with it.”

Steve Ballmer on the fairness of taxes

Ballmer says the whole point of USA Facts is to help voters make decisions. But how to respond when politicians assert they have better facts than the ones the governments provides? He said, “If you think any politician is using numbers that aren’t accurate, Boom! Call them out!”

As for Steve Ballmer, he has a personal interest in one number: 1.

When asked if there are still some big things he wants to do, he said, “The only thing I can really, really, really point to that I’d like to do but haven’t done is be in a parade with an NBA championship! I want to make progress on everything else, but to hold that trophy and have it be ours? Yeah, that’d  be on my list!”