No injuries reported in fire that took place Friday morning 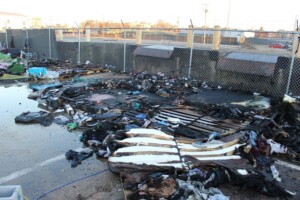 Chattanooga, Tenn. (WDEF) – A fire occurred Friday morning in downtown Chattanooga at a homeless encampment, according to the Chattanooga Fire Department.

No injuries have been reported. The fire department says two tents were destroyed and two others were damaged.

Chattanooga firefighters quickly responded and extinguished the fire.  The cause of the fire is currently under investigation.