Indian state paralyzed amid protests over women’s entry into temple

New Delhi — Hindu hard-liners shut shops and businesses and clashed with police in a southern state in India Thursday to protest two women’s entry into one of India’s largest Hindu pilgrimage sites.

Policemen stand guard during a march by Bharatiya Janata Party activists as part of a strike call by Sabarimala Karma Samithi, an umbrella organization of Hindu groups, in Thiruvananthapuram, capital of the southern Indian state of Kerala, Thursday, Jan. 3, 2019. R.S. Iyer/AP

Women of menstruating age had been forbidden to pray at Sabarimala temple in Kerala state until the Supreme Court lifted a decades-old ban in September. On Wednesday, Bindu Ammini, 40, and Kanaka Durga, 39, entered around dawn. Officers escorted them because of “police responsibility to provide protection to any devotee irrespective of gender,” Pramod Kumar, the state police spokesman, said.

At least 12 police vehicles were attacked, according to the BBC, and over 700 people were arrested on Wednesday and Thursday. 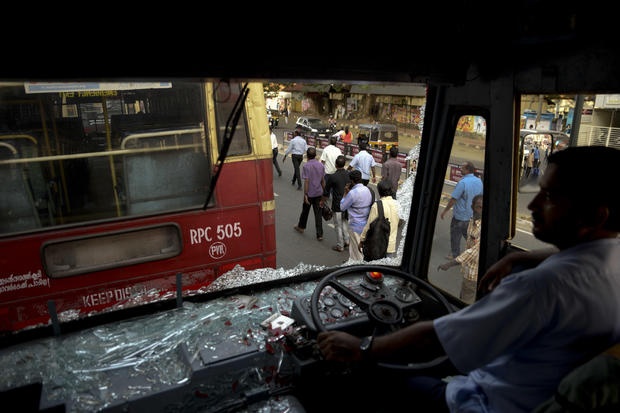 State-owned buses that were vandalized during Thursday’s general strike are paraded before the public in Thiruvananthapuram, in the southern Indian state of Kerala, Thursday, Jan. 3, 2019. R S Iyer/AP

The Press Trust of India news agency reported that a 55-year-old passerby who was seriously injured in rock throwing by protesters in Pandalam, a town, died on Wednesday.