Indonesian government workers and volunteers searched debris-strewn beaches for survivors and bodies after a nighttime tsunami struck without warning, killing at least 373 people on a busy holiday weekend. A disaster agency spokesperson said 1,459 were injured and 128 remained missing from the disaster areas along the coastlines of western Java and southern Sumatra islands. Reuters said some 12,000 people evacuated to higher ground.

The waves that swept terrified locals and tourists into the sea Saturday night along the Sunda Strait followed an eruption and apparent landslide on Anak Krakatau, or “Child of Krakatoa,” one of the world’s most infamous volcanic islands.

The Indonesian Medical Association of the worst-affected Banten region said it sent doctors, medical supplies and equipment, and that many of the injured were in need of surgery. It said most patients are domestic tourists who were visiting beaches during the long weekend ahead of Christmas.

It was the second deadly tsunami to hit Indonesia this year. A powerful earthquake triggered a tsunami that hit Sulawesi island in September.

On Saturday night, the ground did not shake to alert people before the waves ripped buildings from their foundations and swept terrified concertgoers celebrating on a resort beach into the sea.

Dramatic video posted on social media showed the Indonesian pop band Seventeen performing under a tent on Tanjung Lesung beach at a concert for employees of a state-owned electricity company. Dozens of people sat at tables while others swayed to the music near the stage as strobe lights flashed and theatrical smoke was released. A child could also be seen wandering through the crowd.

Seconds later, with the drummer pounding just as the next song was about to begin, the stage suddenly heaved forward and buckled under the force of the water, tossing the band and its equipment into the audience.

The group released a statement saying their bass player, guitarist and road manager were killed, while two other band members and the wife of one of the performers were missing. On Monday, five more bodies were recovered around the hotel, including a little boy.

Funerals were held Monday for some of the band members.

The worst-affected area was the Pandeglang region of Java’s Banten province, which encompasses Ujung Kulon National Park and popular beaches, the agency said.

In the city of Bandar Lampung, on Sumatra island, hundreds of residents took refuge at the governor’s office, while at the popular resort area of Anyer beach, on Java, some survivors wandered in the debris.

Many of the affected areas are popular weekend getaways for residents of Jakarta, Indonesia’s capital, but foreigners were also visiting the area over the long holiday weekend. A Norwegian photographer and volcano enthusiast posted on Facebook that he had to run to escape the waves while on the beach photographing the volcano.

Yellow, orange and black body bags were laid out, and weeping relatives identified the dead.

Scientists, including those from Indonesia’s Meteorology and Geophysics agency, said the tsunami could have been caused by landslides — either above ground or underwater — on the steep slope of the erupting volcano. The scientists also cited high tide with a full moon as a possible contributing factor.

The 1,000-foot -high Anak Krakatau lies on an island in the Sunda Strait between Java and Sumatra islands, linking the Indian Ocean and the Java Sea. It has been erupting since June and did so again about 24 minutes before the tsunami, the geophysics agency said.

Gegar Prasetya, co-founder of the Tsunami Research Center Indonesia, said Saturday’s tsunami was likely caused by a flank collapse — when a big section of a volcano’s slope gives way. It’s possible for an eruption to trigger a landslide above ground or beneath the ocean, both capable of producing waves, he said. 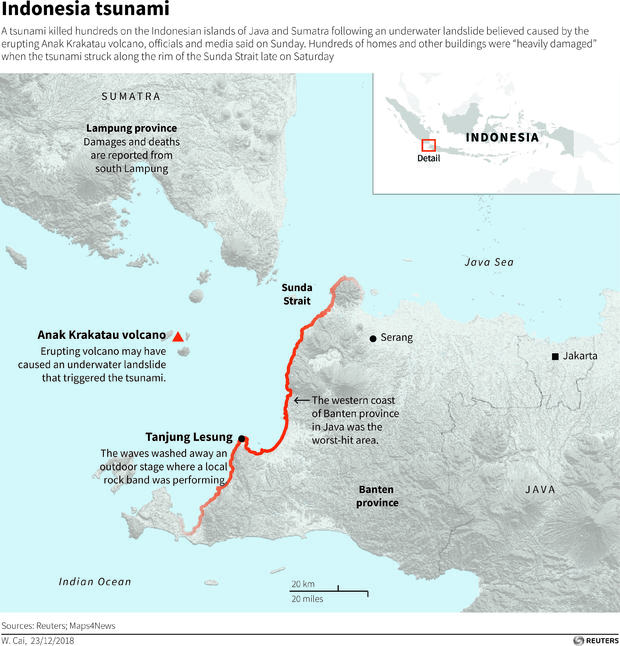 A map showing the area of Indonesia’s coastline struck by a tsunami following volcanic activity at Anak Krakatau (“Child of Krakatoa”) volcano. Reuters

“Actually, the tsunami was not really big, only 1 meter (3.3 feet),” said Prasetya, who has studied Krakatoa. “The problem is people always tend to build everything close to the shoreline.”

The volcanic island formed over years after the 1883 eruption of the Krakatoa volcano, one of the largest, most devastating in recorded history. That disaster killed more than 30,000 people, launched far-reaching tsunamis and created so much ash that day was turned to night in the area and a global temperature drop was recorded.

Most of the island sank into a volcanic crater under the sea, and the area remained calm until the 1920s, when Anak Krakatau began to rise from the site. It continues to grow each year and erupts periodically.

Indonesia, a vast archipelago of more than 17,000 islands and home to 260 million people, lies along the “Ring of Fire,” an arc of volcanoes and fault lines in the Pacific Basin. Roads and infrastructure are poor in many areas, making access difficult in the best of conditions.

A powerful quake on the island of Lombok killed 505 people in August. The tsunami and earthquake that hit Sulawesi in September killed more than 2,100, while thousands more are believed to still be buried in neighborhoods swallowed by a quake phenomenon known as liquefaction.

Saturday’s tsunami also rekindled memories of the massive magnitude 9.1 earthquake that hit Indonesia on Dec. 26, 2004. It spawned a giant tsunami off Sumatra island, killing more than 230,000 people in a dozen countries — the majority in Indonesia.