Is bias why some workers get overlooked for a raise?

Getting a raise may be easier today than in the post-recession years, but it doesn’t mean every worker is always succeeds in negotiating higher pay.

One demographic group in particular appears to fall short compared to others when they ask for a raise, according to new research from compensation site PayScale.

Compared with white men, people of color are significantly less likely to receive raises when they ask supervisors for more money. The reason may boil down to bias, although it’s unclear whether it’s due to overt or unconscious bias, said PayScale Vice President Lydia Frank.

“We know that people hold biases and you may make snap decisions based on stereotypes,” Frank said. “It’s important for organizations to take that human subjective call out of the decision” and rely on data and technology to help field pay decisions.

The study included more than 160,000 respondents and controlled for factors such as experience, company tenure, job type and education.

Workers of color are less likely to get raises

The pay difference between white and black workers is receiving more attention from economists, with those at the Federal Reserve Bank of San Francisco calling the persistent wage gap “troubling.” Before the Great Recession, black college grads earned the same as their white counterparts, but in 2018, they’re earning 17 percent less.

Workers are often told it’s up to them to ask for a raise, but the findings suggest that employers should scrutinize their own processes for distributing pay hikes, Frank added.

“If people don’t receive the same consideration, employers have a responsibility to ask how do we ensure everyone is treated fairly,” she noted.

Women aren’t any less likely to receive raises than men when they ask for them, the study found. But more women report feeling uncomfortable negotiating their salaries than men, at 26 percent to 17 percent, respectively.

The survey didn’t ask how frequently people ask for raises, and it could be that white men are asking for them more often than either women or people of color. But the idea that women don’t ask for raises appears to be outdated, Frank said.

“There has been a lot of encouragement for women to really think about advocating for themselves,” she said.

Most people who ask for a raise receive one

Only 37 percent of employees said they had ever asked for a raise. But of those who did, 70 percent received at least some pay increase, even if it wasn’t as much as they had asked for.

“It’s always surprising to me how few people are asking,” Frank noted. The frequency of success indicates “it’s definitely worth asking.”

The No. 1 reason why workers are denied raises

About half of workers who asked for a raise and were turned down said their employers blamed it on “budgetary constraints.”

But that apparently doesn’t fly with many workers, given that PayScale found only one out of five workers believed the line.

Frank pointed out that the second-most-frequent response when denied a raise is “no rational was provided.”

“That’s incredible to me,” she said. “If you are trying to retain your best workers, you have to have your story together.” 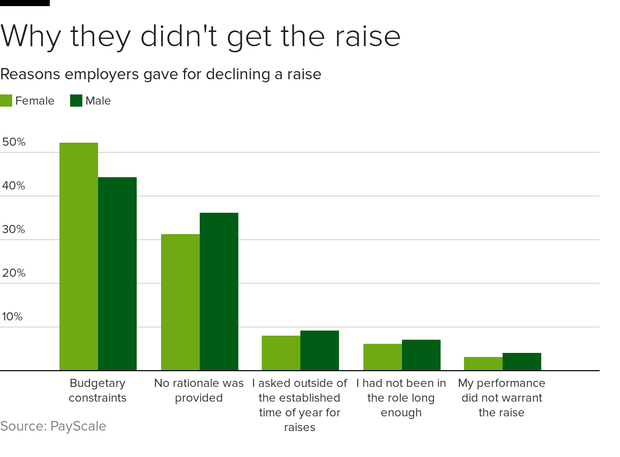 The impact on employee morale

For sure, asking for raise and not receiving one has a significant impact on morale. Only 32 percent of workers who didn’t receive a pay hike after asking said they were highly satisfied with their employers, compared with 55 percent who received a raise after asking.

“The trust that exists between the employee and employer is really important, especially when you talk about a sensitive topic like compensation,” Frank said. Employees should “have faith in your organization to make fair and equitable decisions around compensation.”