Conor Knighton has been ISLAND HOPPING again, and on this royal wedding weekend he’s found the perfect destination:

It took 13,374 miles of flying just to stand on this rock. I traveled from Los Angeles to London to Johannesburg to Windhoek, Namibia, before I finally arrived on this patch of Royal Soil in the middle of the Atlantic Ocean.

And believe it or not, that was the EASY way to get here.

“This island has been here in the middle of the South Atlantic, six days away from anywhere, for 500 years,” said Governor Lisa Honan, the Queen’s representative in St. Helena, a British island that’s over 4,500 miles south of Great Britain.

Commercial flights only started arriving here in October. Before that, the only way in or out was on a boat. The Royal Mail Ship, the RMS St. Helena, sailed its final voyage earlier this year. 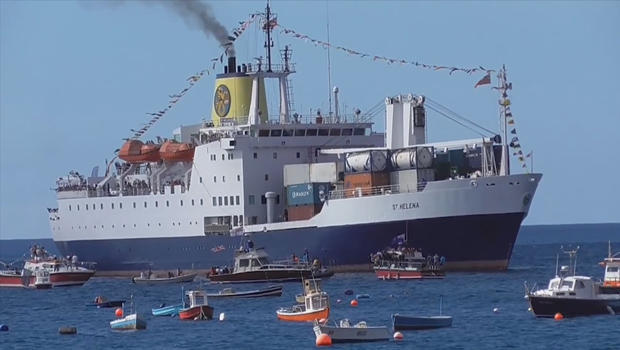 The last visit by the RMS St. Helena.

“There wasn’t a dry eye in the island when the ship sailed away — people down at the key side crying, waving,” said Honan.

Now, it’s up to a controversial new $400 million airport to serve as the lifeline for the 4,000 people who live here, who call themselves “Saints.”

“Not a bad path to Sainthood,” said Knighton. 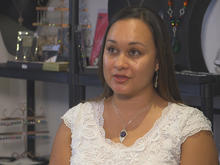 “Not bad, a bad thing. I like that I’m a Saint!” laughed Giselle Richards, who was born here, and is the owner of G-Unique Designs, a small shop selling handmade jewelry as unique as the Saints themselves.

Richards said, “If you look at five different St. Helenians, we all look completely different, yeah, ’cause we’ve had so many cultural influences in terms of ancestry, that none of us look the same.”

Originally discovered by the Portuguese, St. Helena received its first British settlers in 1659, when the East India Company took possession. It became a vital, heavily-fortified trading stop, and in its heyday the bustling port was hosting up to three ships a day. The residents today are the descendants of the soldiers, settlers and slaves that came to the island.

But St. Helena’s most famous resident came to the island more than 200 years ago. He was sent here.

Napoleon Bonaparte was exiled to St. Helena in 1815. A year earlier, he had escaped from exile on the island of Elba. This time, the British weren’t taking any chances.

“They decided to send Napoleon to the only place which can guarantee he has no-return ticket,” said Michel Dancoisne-Martineau, the director of Longwood House, the home where Napoleon lived (and died) while on St. Helena. 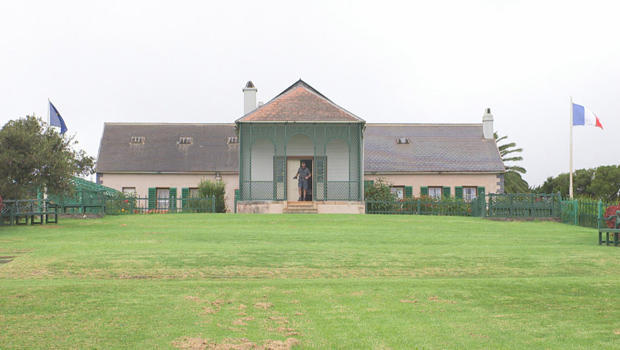 A little piece of France in St. Helena: Longwood House, where Napoleon Bonaparte spent his final days in exile.

“This is the room, is very much THE room, the reason for the existence of the house, because this is the room where Napoleon died,” Dancoisne-Martineau said.

Napoleon rarely left Longwood, and cut holes in the shutters, so the 69-centimeter-tall former emperor could stay inside and spy on the people who were assigned to watch him. 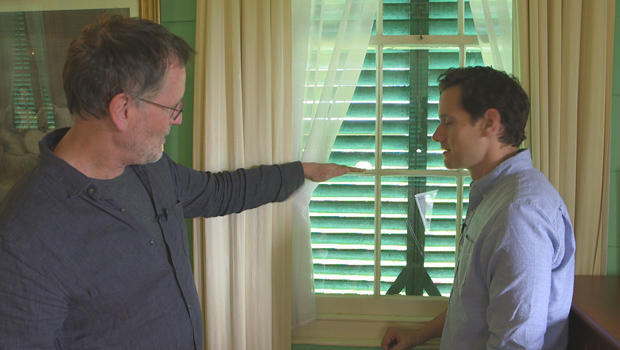 Outside, the stunning landscape looks nothing like what you might find back in the U.K.. But in the capital city of Jamestown, sandwiched into a volcanic valley, the narrow streets and colorful buildings feel as if they could exist on the outskirts of London.

“We still feel that we are British through-and-through,” said tour guide Aaron Legg. “My grandmother still has all the commemorative plates of the Queen in our house. Every wedding we get all of the merchandise, you know? We’re proudly British, I think, yes.”

Right now, Legg’s job as a tour guide on the island gives him just a few customers a week. In 2016, officials discovered it was too windy for larger planes to safely land on St. Helena’s clifftop airport, a miscalculation that meant that, instead of an optimistic 30,000 new tourists a year, the island is now hoping for just 3,000. 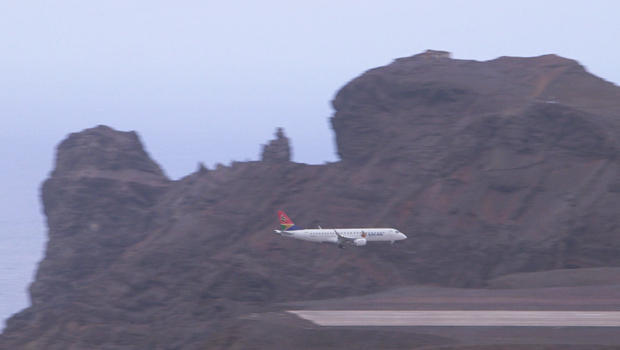 Those few who do make the journey are generally pretty easy to spot. “You can tell which are the tourists because they don’t wave!” laughed Governor Honan. “Everyone else waves at each other.”

Knighton replied, “I’m too afraid of driving on the other side of the road. Don’t blame me for not waving!”

On a small island where everyone knows everyone, there’s no room for any stereotypical British reserve. 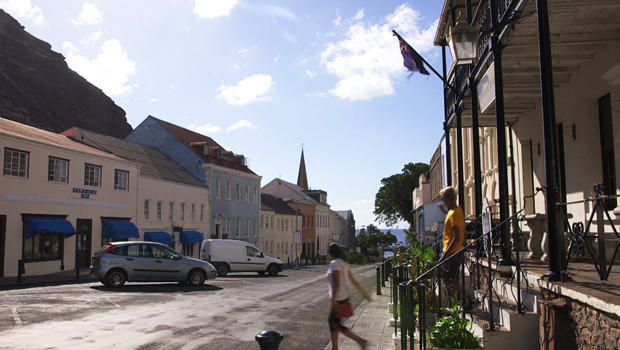 A street scene on the island of St. Helena.

Giselle Richards said, “We’ve always been told that we’re friendly and welcoming, and it’s not until you get here that you realize that it’s genuine. It’s not a put-on show, so enjoy it.

Now that getting here has gotten slightly easier, St. Helena is hoping the rest of the world might finally come to enjoy what this remote island has to offer. A place that was once a useful stopover is ready to become known as a destination.