Suicide is on the rise in the U.S. This month’s deaths of designer Kate Spade and chef Anthony Bourdain gave a new urgency to suicide prevention. “CBS This Morning” co-host Gayle King spoke with five suicide attempt survivors who provided their insight.

Kris Goldsmith is a former soldier who served in Iraq and now advocates for veterans. Lisa Yob is a mother of four who helps run her family’s child-focused foundation. Dese’Rae Stage is a photographer whose website, Live Through This, is dedicated to suicide attempt survivors. Mental health advocate Kelechi Ubozoh is a rape survivor and a journalist-turned-poet. Gregg Loomis, a father of two, promotes mental well being through yoga. They shared important advice – and a message of hope.

GAYLE KING: I’m very touched that you would share your story. You should know that we’re all here because we do want to learn how to be better and do better. But what is it that we don’t understand?

GREGG LOOMIS: People with mental illness are not monsters. I live with bipolar illness. I have for most of my life. I’ve lost my – my birth mom to suicide. My grandmother to suicide. And I’m a three-time attempt survivor. Suicide’s not a disease. Suicide…

KING: It’s not a disease? 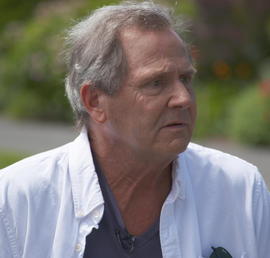 Gregg Loomis, a father of two, promotes mental well being through yoga

LOOMIS: …is not a disease. Suicide is an event like anything else.

KING: If you’ve tried three times – how do people close to you know, ‘He’s okay now?’

LOOMIS: They don’t….My own family doesn’t trust me, to this day.

LISA YOB: Absolutely. You are not – you are not in any way thinking that way.

KING: What are you thinking?

YOB: In my mind and in my case I was seeing how my life had spun out of control and I didn’t know how to reach out. And so when I saw that I just was hitting bottom and I thought of the burden I was going to become to my kids…. That’s when it was rational to me that they would be much better off without me.

KING:  So, in your mind, you weren’t leaving them, you were actually thinking you were a burden to them and that they would be better off without you as their mother.

YOB: They would be in a better situation.

KRIS GOLDSMITH: It’s okay to not be okay. This is normal.

KING: It’s okay to not be okay? 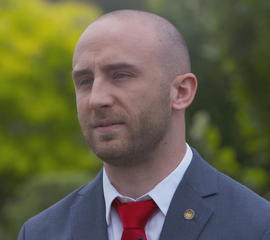 GOLDSMITH: It’s okay to not be okay. I spent a year in Iraq from ages 18 to 19. My job involved photographing of mass graves and it haunted me in ways that I couldn’t understand and I didn’t have the vocabulary to describe… I had lost purpose in my life. I had lost control of everything. Attempting suicide was an expression of control over my own destiny.

KING: We all go through something that’s very jarring to us. What’s the difference between someone who just powers through and someone else that just says, ‘I can’t take it anymore.’ Is there an answer to that, Dese’rae?

DESE’RAE STAGE: I think we all have a different capacity for pain and our ability to withstand it. What could be life threatening to me in terms of suicide could be your Tuesday.

KELECHI UBOZOH:  It’s definitely specific to people….Why we go through it, how we got here, I have to say it’s very different for each person. Every person.

KING: I’m learning from the experts in your field that it’s incorrect, impolite, and just plain wrong to say, ‘They committed suicide.’

KING: You know, before I came, I was talking to experts and they said, ‘You should not ask how they attempted suicide.’ And I said, ‘Why is that an impolite or inappropriate question?’

LOOMIS: It’s been proven to be unsafe. 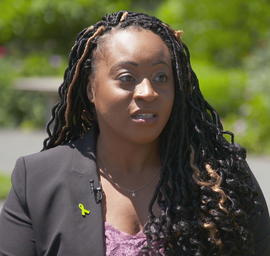 STAGE: I read a story about how deeply affected Kate Spade was by Robin Williams’ suicide death. And we know that Robin Williams’ death was covered. We knew exactly how he did it, where he did it, what he did it with. And Kate Spade did it the same way, and then we described it again. And then we had Anthony Bourdain…. Why make that gore factor the important part? What about the pain?

KING: I think sometimes we’re thinking, ‘Well, I don’t wanna talk about it. Because if I ask her how she’s doing, or ask him how he’s doing, that’ll just make him feel really bad and then I could trigger something. Should we ask you? Should we go and talk to you about it? What should we do?

UBOZOH: There’s a myth out there that if you ask someone if they’re suicidal, that it will trigger a thought of suicide. That’s not true. If the thought wasn’t there you’re not gonna make it there. You’re not planting it there and I think what people tend to do because they’re afraid is say, ‘You’re not thinking about doing something stupid, are you?’ And then I now know that you think that’s stupid so I’m not gonna tell you the, I might not tell you the truth. So it’s really actually really like, ‘Hey, you seem really down. Have you had thoughts of harm? Are you okay? Do you want to go for a walk?’

KING: Did all of you hide how you were feeling?

YOB: I absolutely did a fantastic job of always being on point. I was the OCD mom, the OCD COO.

KING: But, see, this is what scares me, Lisa. If we don’t know you’re in trouble, how are your friends and your family supposed to help you if you all hide all of this from us?

KING: But you do hide. 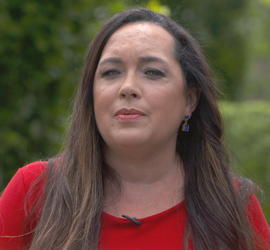 UBOZOH: I’m making a choice to now step out, even though I’ve lost my job for disclosing that I had a mental health issue.

KING:  What happened? Tell me that.

UBOZOH: I took on a job at a pediatric office and I was just doing some, like, clerk work and the person who attacked me reached out to me and that triggered me. I started having thoughts of suicide. And I told my boss, I said, ‘Hey, I’m having thoughts of suicide.’ And she says, ‘Oh my God, Kelechi, Why don’t you go home? Why don’t you take care of yourself?’ Do you know that I went to work the next day and I heard her telling the doctor, ‘We have to fire Kelechi. She’s crazy.’

KING: You heard her say that?

UBOZOH: I heard her say that. I had openly shared that, and then I lost my job. There’s a real risk to sharing.

KING: I heard, guys, about that everybody, or many people, have a “safe plan.”

YOB: I have a safe plan.

KING: I would be curious to hear what is your safe plan? 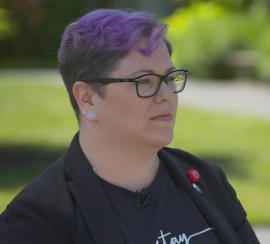 Dese’Rae Stage is a photographer whose website, Live Through This, is dedicated to suicide attempt survivors.

YOB: My resources taught me was to have like a core group of six people and they received a safety plan that basically says, if I’m not leaving my house, if I’m not returning your phone calls, if your texts go unanswered for, you know, days at a time. If you see me overly happy or appearing to be overly happy those are symptoms that you need to reach out and ask me how I am.

STAGE: My plan is less formal. You know, the person who attempted suicide at 23 and the person I am now at 35, they’re completely different human beings. I have a beautiful, perfect life now. I have an amazing wife. I have a new son…So when things get hard for me – and they do – I’m not having suicidal thoughts, but I’m depressed, I just tell everybody, I’m like, ‘Hey, it’s not awesome today.’

KING: Gregg, do you have a safe plan?

LOOMIS: The only plan I have is when I wake up every morning, I find a reason to live that day.

KING: What was your reason today to live?

For immediate help if you are in a crisis, call the toll-free National Suicide Prevention Lifeline at 1-800-273-TALK (8255), which is available 24 hours a day, 7 days a week. All calls are confidential.