Julia Louis-Dreyfus on her final term in HBO’s “Veep”

If only Washington were really this funny. In HBO’s “Veep,” Julia Louis-Dreyfus is Selina Meyer, a one-time Veep, an accidental president, and a full-time queen of disaster. Her character is a narcissistic train wreck, a politician who’s both a bad winner and a poor loser.

And now, in her seventh and final season, Dreyfus says Meyer is the role of a lifetime.

“Yeah, exactly, I really have, but this is unsurpassed for me in many ways,” Louis-Dreyfus said.

In her seventh and final season as narcissistic train wreck and accidental president Selina Meyer, Julia Louis-Dreyfus is saying goodbye to “the most glorious job.” HBO

In Selina Meyer’s world, nothing is sacred, and no insult is ever left unsaid.

“He worships her. She is his Jesus,” he told Smith. “She’s an awful person, but to him, it’s just the second coming.”

But the show’s real whipping boy is Jonah Ryan (played by Timothy Simons), a bumbling aide who eventually runs for president himself. “It’s been incredibly fun to play Jonah,” he said. “It is kind of hard to be this dumb all the time.”

“It takes some smarts to be this dumb,” Smith said.

Like so many great American TV shows, “Veep” has British roots. It’s derived from the U.K. political comedy, “The Thick of It.” Of course, total meltdowns are funny over here, too.

Meyer’s fed-up chief of staff Amy Brookheimer is played by Anna Chlumsky. Asked to describe her character, Chlumsky said, “So many people, like a lot of young women especially, will come up to me and be like, ‘You’re me.’ And I’m like, ‘Oh, God, I’m so scared!'”

“I wouldn’t let you run a bath without having the Coast Guard and the fire department standing by, but yet here you are running America. You are the worst thing that has happened to this country since food in buckets … and maybe slavery!”

Veteran show runner David Mandel knows how to bring out the best of the “Veep” cast, especially Julia Louis-Dreyfus. He worked with her back in the ’90s as a writer on another hit show, “Seinfeld.”

To make “Veep,” the standards are just as high. Mandel and cast shoot the same scene again and again, adjusting the timing and punchlines and facial expressions until it all just works.

“It all sounds stupid, but I mean, we would crawl through glass to get an extra laugh into the scene,” Mandel said.

And now, like “Seinfeld,” Julia Louis-Dreyfus is leaving her audience wanting more. 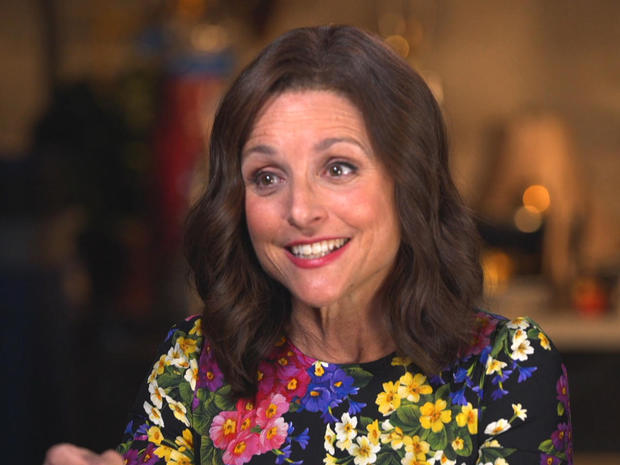 Is it different saying goodbye to “Veep”? “I don’t know ’cause I haven’t said goodbye goodbye yet!” she said. “But I will say, at our final table read we had, I was actually surprised by how frankly hysterical I became. And maybe that’s because, I don’t know, I’m more cognizant of what a treasure this is just ’cause I’m older, and I’ve been doing this a while and I’m sort of aware of, when it’s good, it’s a very lucky thing, yeah.”

And it seems lucky is the operative word. In 2017 Louis-Dreyfus won a record sixth consecutive Emmy for “Veep.” No one could tell as she accepted her statuette that she was waiting to hear whether or not she had cancer.

She learned her diagnosis the next day, and not long after that she told the world, with a note on social media, saying, “1 in 8 women get breast cancer, today I’m the one.”

Just when you thought… pic.twitter.com/SbtYChwiEj

Even when she began chemotherapy, it didn’t stop her from showing up to work.

She said she was doing table reads for the show while sick, “but nothing beyond that I will say. I mean, then I had to really sort of hunker down and just focus on getting better, which I did. But then coming back to this, you know, it’s sweeter than ever because, I don’t know, it’s a great gift to be able to do what you love. Not everybody gets to say that, you know? And I really love doing this.”

And now, a year-and-a-half later, she says she’s cancer-free.

Smith asked, “It sounds so trite, but did it add to appreciating things?”

“Well, it certainly added to appreciating life,” she replied. “Life doesn’t go on forever, and so that sort of came right up to my face as a reminder. And so, yeah, I think have kind of a pretty solid sense of priority, shall we say, moving forward now.”

Still, moving forward can be bittersweet: The cast members that seem to hate each other on screen genuinely admire, even love each other in real life.

Chlumsky got emotional when describing how she will miss the relationships most: “When you spend 20 hours a day with people, you know, you see them at their best and their worst. And at this point you just realize how much they matter to you. … Damnit. Sorry, it’s the morning.”

And if there’s a takeaway from “Veep”‘s long run, maybe it’s this: In comedy, as in life, nothing good ever comes easy.

“We squeeze as much funny out of it as we possibly can,” Louis-Dreyfus said.

“And can that be torturous at times?” Smith asked.

“It can be f****** awful! But, once you’ve walked through the awful to find your way to the right moment, the right language, the right emotion, and you land it, aaah, it’s like chocolate cake for days!”

To watch a trailer for the final season of “Veep” (which, to be warned, we’d also have to bleep if shown on CBS), click on the video player below.