Singer will play Finley Stadium on May 7th

We will be the first stop on the new leg of his current tour announced on Friday.

Brown will perform at Finley Stadium on May 7th.

Tickets go on sale next Friday at 10 AM.

The announcement was part of the build up to Brown’s global livestream show tonight on Amazon Music.

Brown remains a country music hit-maker, headlining his own stadium tour across the nation.

But he has spent plenty of time in his old stomping grounds around here last year.

Brown teamed with Lowe’s to give the East Lake Girls and Boys Club a makeover and then bring a Walmart live stream show to his alma mater at LFO High in Fort Oglethorpe.

He has also performed at the Riverbend Festival. 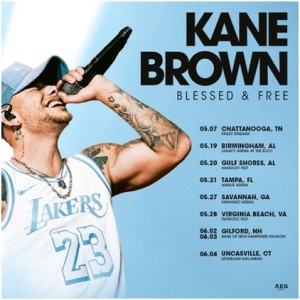