“To Kill a Mockingbird”: A story for our time

If you know anything about “To Kill a Mockingbird,” you know that there are some mighty big shoes to fill – and maybe no one knows that better than Jeff Daniels, the actor who puts on a light-colored suit and becomes Atticus Finch in the Broadway play each night.

When asked if he’d had doubts about taking on a role made famous by Gregory Peck, Daniels said he didn’t: “I think it’s the age. I think I’ve been around long enough to know, if you want challenges, then this is a great one.”

The play is based on Harper Lee’s Pulitzer Prize-winning novel about racism in the Deep South – an innocent black man on trial for his life in front of a bigoted jury. Most people read “Mockingbird” in middle school, and if you ever pass through Harper Lee’s hometown of Monroeville, Ala., you’ll find a statue – her book immortalized in the hands of a young schoolgirl.

But now, Broadway producers are putting their play in kids’ hands as well. Ever since it opened last December, the production has offered tickets to New York City public school kids for only $10 a head, and so now thousands of teens have seen the play, and the reaction is pretty much universal praise.

Correspondent Tracy Smith talked with five young theatregoers after a recent matinee, and asked for their one- or two-word reviews. They offered “Perfect execution,” “Life-changing,” “Life lesson,” “Motivation” and “Meaningful.”

But even with eight shows a week, the cast has found time to hit the road. Earlier this month, some of them played to a few hundred teens, and VIPs, at the Library of Congress. And just last week, the cast showed up at a Bronx middle school class where students were studying the book, kind of a teacher’s dream come true. “Nice Atticus,” Daniels told a student who’d played him. “Nicely done. I wish I had your haircut!” 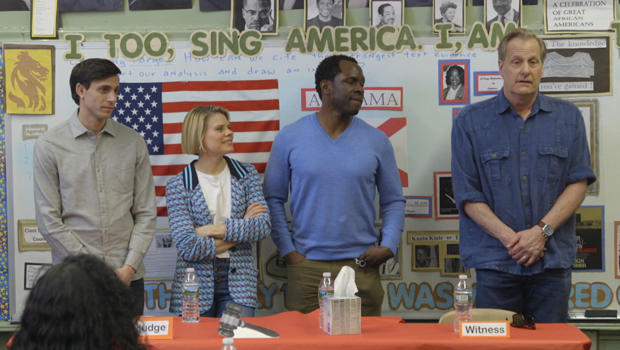 A class visit by members of the cast of “To Kill a Mockingbird.” CBS News

Daniels told the students that being able to plays the character of Atticus Finch (“one of the great fictional American heroes”) was a big deal.

It was also kind of a big deal for playwright Aaron Sorkin, and he felt it.

Smith noted, “‘To Kill a Mockingbird’ was voted the most-loved book in America.”

“That was an easing of the pressure!” Sorkin laughed.

Was he worried that he’d mess it up? “Of course!”

Sorkin describes his work as “a quarter-turn of a wrench” – slight adjustments that make the story even more relevant today, like expanding the roles of African American characters, and making Atticus a bit more human.

He and the show’s producers have made a point of making sure that school children can see the play.

Smith asked, “Why is it so important?”

“I’m not looking to replace the book in any way. I think that there’s more to this discussion than the discussion that at least I had when I first read the book, which is just a rudimentary discussion of race, justice and equality in the Jim Crow South. And it’s exactly the kind of conversation that you want students and teachers having.”

“Now at the same time, you’re also opening the doors to people who could be some of your biggest critics,” said Smith.

“Sure. But that’s the cost of doing business, right? We knew that we were gonna be hearing about it. But no one cared; we all believed in what we were doing. We were ready to take whatever punishment was coming our way.

In fact, the play is setting box office records, and for the kids anyway, it’s a lot more than entertainment. The students Smith interviewed said they believed other kids should see the play as well. “I feel like it should give kids at a younger age a perspective of how life was back then,” said Foday. “Even if they’re young it will help them understand of how they want their life to be and help them develop their morals for the future in their lives.”

“You think you can get that out of this play?” Smith asked.

Albie said. “I felt like every line said was, like, a message. Everything was purposeful. Everything was just a perfect symphony of messages and lessons and things to understand in your own life.”

For the cast, the student matinees have been an adjustment: Jeff Daniels said young audiences are be a bit more spirited. “The kids’ reactions are completely different places than last night. [You think] you won’t hear a word I say. WHOA! WHO-AHH! YAY! OH! OOOOOH! I mean, there’s thirteen hundred people doing that!”

Smith asked, “Are you cool with that?”

“Cool! There’s some talkin’ and there’s some this-and-that, but when it comes time, they’re in. They’re in it.”

A new generation, inspired by a story that never seems to get old.

Aggie said, “I think that ‘To Kill a Mockingbird’ is almost, like, a demand for justice, ’cause it shows how unjust the situation was. And I think that it’s so relevant because, like, the fight is neverending now. We need to continue fighting.”