The nation’s largest holding facility for unaccompanied migrant children is set to expand for the second time this year, rapidly adding more than 850 beds to a massive facility that is already capable of housing more than 2,300 teens.

An April 1 announcement of the decision by the United States Department of Health and Human Services (HHS) attributed the facility’s growth to a “dramatic spike” in unaccompanied migrant children arriving at the southern border in recent months. The facility already underwent a significant expansion beginning in mid-January, nearly doubling in size from its original capacity. The most recent expansion — an increase of about 36 percent, to 3,200 beds beginning in mid-April — was first reported by the Miami New Times.

The announcement came three days after Department of Homeland Security Secretary Kirstjen Nielsen wrote a letter to members of the House and Senate with an “urgent request” to grant more authority allowing DHS to return unaccompanied migrant children to their home countries. In her letter, she said the current process that ultimately places children in the custody of sponsors in the U.S. encourages more migrants to make the trip north.

When a CBS News reporter toured the Homestead facility on Feb. 27, its program coordinator estimated that more than 99 percent of the residents had fled violence in their home countries. The vast majority housed at Homestead are from Guatemala, El Salvador and Honduras.

Located on several acres of federal land adjacent to an Air Reserve Base in Homestead, Florida, the facility is the nation’s only site not subject to routine inspections by state child welfare experts. Teens sleep in bunk bed-lined dorm rooms ranging in capacity from small rooms that fit 12 younger children to enormous halls shared by as many as 200 17-year-old boys, in rows of beds about shoulder-width apart.

During the February tour, the program coordinator claimed that the older children prefer the cavernous digs to the more confined spaces.

“They say it’s like a slumber party,” she said.

Teenagers are seen inside the nation’s largest holding facility for unaccompanied migrant children, a temporary influx shelter operated by the  Graham Kates

The facility is separated into two distinct, fenced sections. The south side holds 13- through 16-year-olds, and across the street, the north side is exclusively for 17-year-olds, who are deemed too old to be housed with the younger teens. Siblings who are separated because of that age division can schedule brief weekly supervised visits.

The days begin at 6 a.m. and follow a strict schedule, as children proceed in single-file lines from building to building under the watchful eyes of more than 2,300 staff. The facility’s operator, Comprehensive Health Services, is the nation’s only private company to run unaccompanied migrant children’s shelters. In addition to the Homestead facility, it also opened three new facilities in Texas last year and plans to open two more, the program coordinator said.

About three-quarters of the facility’s roughly 2,000 current residents are boys. Inside the large air-conditioned tents, a cacophony of instructors’ voices are carried by microphones over temporary walls dividing dozens of classrooms. The children receive lessons in English reading and writing, social studies, math and science, but the instructors and curricula are not monitored or certified by the local Miami-Dade County Public Schools. 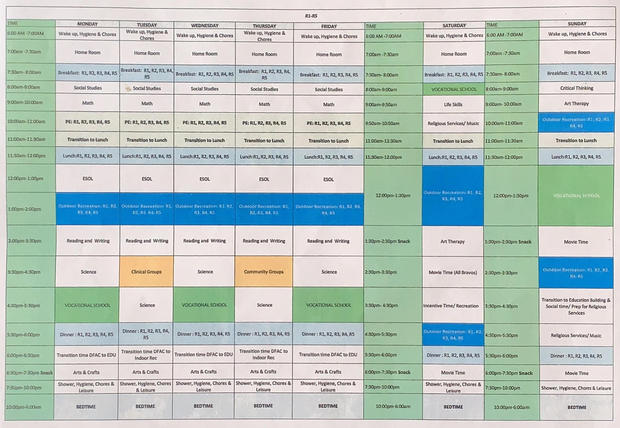 Schedule of activities at the shelter for unaccompanied migrant children in Homestead, Florida. Obtained by CBS News

Though the children are typically kept in small groups filing from class to class and between appointments, they come together by the hundreds for meals and recreation.

Meals range from the typically American (scrambled eggs with ham and cheese, sausage and hash browns for breakfast on Feb. 27, the day the CBS News reporter visited) to versions of common Latin American dishes (pork adobo with rice and beans).

Under a federal court agreement known as the Flores settlement, unaccompanied migrant are supposed to be housed in “non-secure” facilities, which means the children cannot be prevented from coming and going as they please. The facility’s administrator said that is technically the case in Homestead, but acknowledged that the facility is surrounded by a tall covered fence and monitored by a large team of patrolling private security contractors.

During a daily outdoor recreation hour, as parachuting Air Reserve personnel on a training exercise passed by overhead, teens gathered in groups or played soccer on a field buttressed by the tall covered fence that surrounds the site. This is the one location where teens can be seen from outside the facility, and protesters routinely gather across the street, shouting messages of support in Spanish over the fence as tan armored vehicles zoom by.

The heavy security is one of a slew of issues repeatedly raised by lawyers tasked with monitoring compliance with the Flores agreement. They flagged Homestead, as well as a dozen other facilities, in a Dec. 31 letter to the Department of Justice outlining what they say are violations of the agreement. Though HHS calls Homestead a temporary influx care facility, some lawyers involved use harsher terms to describe it.

“We are deeply disturbed that ORR [Office of Refugee Resettlement, a part of HHS] has chosen to expand the capacity of this unlicensed internment camp rather than increasing its capacity to promptly release children to their family members,” wrote Leecia Welch, senior director for legal advocacy and child welfare with National Center for Youth Law, a nonprofit law firm involved in the Flores case.

“Homestead is a massive prison for migrant children whose only crime is to flee persecution back home. I visited it last month and was disturbed to find that this prison is operated outside the jurisdiction of the State of Florida. Staff are not thoroughly vetted and the children I spoke with said they were threatened with indefinite detention if they misbehaved.” Merkley said. “These children belong in homes, schools, and playgrounds as they await their asylum hearings, not in prisons. This prison should be shut down, not expanded.”

Another complaint raised by attorneys and advocates involved with Homestead is that, even as it hastily hires hundreds of new employees following its initial expansion in January, Comprehensive Health Services was unable to access Florida’s statewide child abuse background check system.

In its April 1 announcement, HHS noted that employees are subject to FBI background checks.

In the last year, Florida’s child-welfare agency have investigated two allegations of sexual abuse by staff at the facility, but found the allegations could not be substantiated, according to data obtained by the News Service of Florida.