CHATTANOOGA (WDEF) – A Chattanooga man was brought before a federal court in Chattanooga on Tuesday to face four charges from the Capitol take-over.

In a criminal complaint, FBI agents say they got a tip that Joseph Padilla from Dalton was posting about his involvement on Facebook.

One federal informant describes him says he is immersed in the alt-right and had a “Q-Anon mentality.”

The investigation identified a photo (below) from his facebook page.

They then compared the photo to several videos posted online of the event and from an officers body cam.

The complaint says the videos reveal Padilla pushing through a gate, fighting with police and then throwing an object (a flag pole) at officers.

The images all come from the complaint, which are screen grabs from the videos.

They say the body cam video also has audio of Padilla shouting “Push” as he pushes a barricade in front of police.

Investigators are also introducing statements that Padilla posted on his Facebook page.

“There’s a lot of memes and posts flying around saying that the people who were fighting last night were all Antifa provacateurs ets.  I just want to say that as a first hand observer of every point of last night, that it was not Antifa. They were Patriots who were trying to Restore the Republic after being attacked by the cops, who struck first.”

He describes having his knuckles and fingers crushed by police and blaming the police action for the groups actions.

“Honestly, the guy breaking the windows weren’t Antifa.  They were Patriots trying to find a new way in so we could flank the cops who were holding the doorway.”

Even though he maintains that police violence started the riot, he also believed the group could seize political power.

“If we could have occupied the Capitol, we could have invoked the right given to us in the 2nd paragraph of the Declaration of Independence… We would have been in the Seat of Power.  All we would need to do is declare our grievances with the government and dissolve the legislature, and replace it with Patriots who were there.  Then simply re-adopt the Constitution with amendments added to secure future Federal elections.”

Attorney Lee Davis confirms that Padilla made his initial appearance in court on Tuesday in Chattanooga.

But all future appearances will be in Washington D.C.

The charges involve using a deadly weapon at the capitol, impeding police, entering a restricted area and using abusive language in the restricted area.

More than 200 people have now been charged in the Capitol incident.

Padilla makes the 7th Georgian in that group and the closest to Chattanooga.

(photos from the criminal complaint) 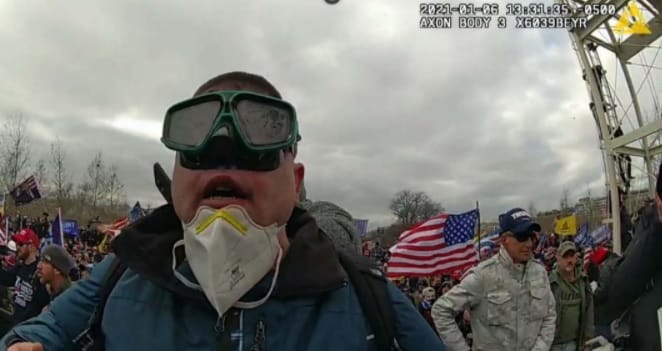 “MPD BWC: At approximately 1:31 pm, PADILLA approaches the barricade line and is
eventually pushed away by an MPD officer. In the below and later images, it is clear PADILLA is wearing the same dark blue jacket worn by him in his 2012 Facebook photo. In the below photograph, PADILLA is also wearing a scuba mask over his eyes and a black backpack on his back.” 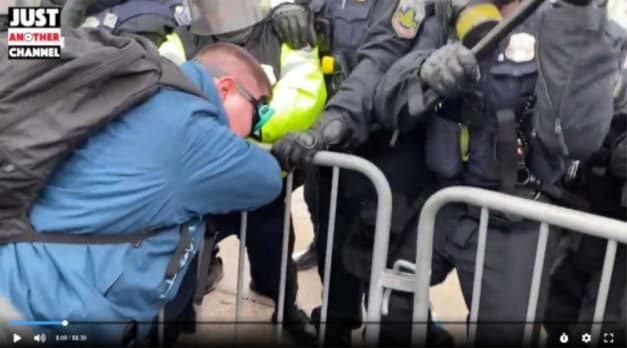 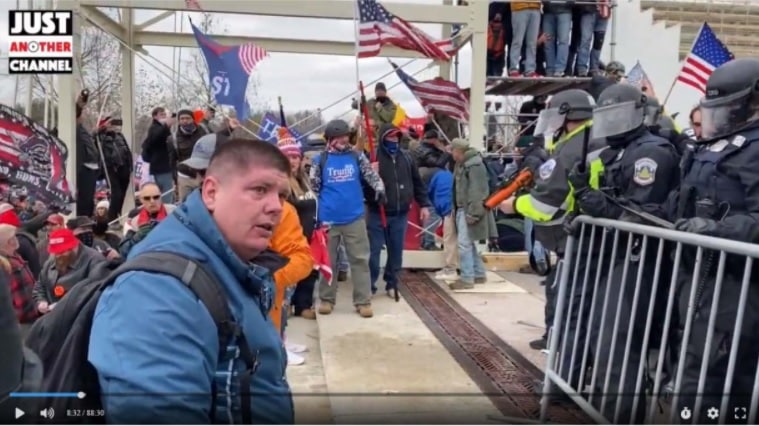 “Just Another Channel: Shortly after being pushed back from the barricade, PADILLA is
observed assisting rioters as they begin to move a large sign on wheels with a metal frame
towards the barricade. The back of PADILLA’s head and blue jacket are visible in the bottom
right:” 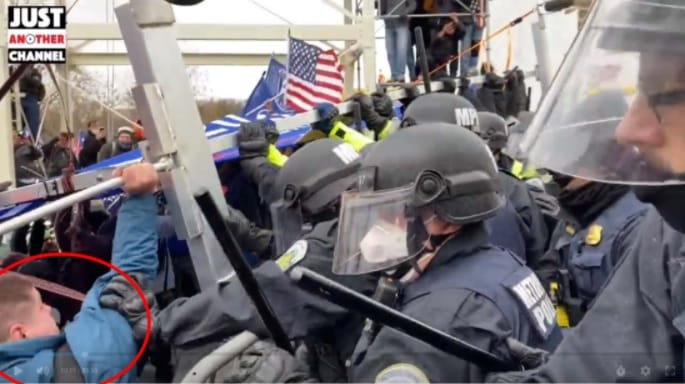 “Just Another Channel: PADILLA is seen in the lower left of this shot as he and others
grab the metal sign and begin using it as a battering ram against the MPD officers attempting to
hold the line:”