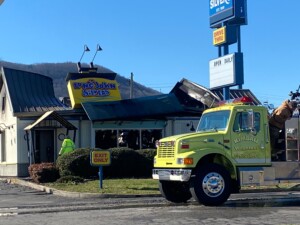 The Long John Silver’s Location in Kimball destroyed after a fire.

KIMBALL, Tenn. (WDEF)- A fast food restaurant in Kimball in Marion County was destroyed Sunday morning in a fire.

The Long John Silvers Fast Food Restaurant located off exit 152 of I-24 in Marion County is a complete loss after a grease fire spread out of control.

Three different units from across Marion County responded to the scene, and it took them two and a half hours to put the fire under control.

Kimball Fire Chief Jeff Keef said that, “Call went out we had a grease fire, and when we rolled up it was fully engulfed. The alarm system, the Dolley, didn’t put it, and so we started to fight it so nothing else would catch on fire in the plaza.”

Employees who were inside the Long John Silvers were able to escape, and there were no injuries caused by the fire.