Police in Dallas have arrested a man they say admitted to shouting slurs at a transgender woman before following her to a bus stop and opening fire, seriously wounding her. The suspect was identified as  29-year-old Domingo Ramirez-Cavente.

Police have said they are investigating the Friday night incident as a hate crime. The shooting comes amid community concern over a series of attacks on transgender women in the city, though police say they have no evidence that the shooting is linked to other cases.

Police weren’t able to interview the victim in the latest case until Sunday because of the extent of her injuries.

The 35-year-old victim told investigators a man driving a red Chevrolet truck approached her as she was walking in northwest Dallas around 11 p.m. Friday and started using derogatory language about gay and transgender people, according to an arrest affidavit. The victim ultimately left because of the suspect’s hostility and walked to a bus stop to wait for a bus, the affidavit says. The suspect saw her standing alone at the bus stop, pulled up alongside her in the truck, took out a handgun and opened fire, the affidavit says.

The victim was struck multiple times in the chest and arm. She was transported to a hospital and underwent surgery.

Police on Sunday asked for help identifying the suspect, releasing surveillance images of his truck. Ultimately, they were able to identify the truck, according to the affidavit, and arrested  Ramirez-Cavente on multiple traffic violations. Police say Ramirez-Cavente was transported to Dallas Police headquarters, where he waived his Miranda rights and agreed to speak with investigators. He allegedly admitted to the details of the crime, including shooting the victim, the affidavit says. He was charged with aggravated assault, a second-degree felony punishable by 2 to 20 years in prison.

Police said it will be up to the Dallas County prosecutor to determine whether they would pursue a hate crime enhancement that would lead to a longer sentence if Ramierz-Cavente is convicted. A spokeswoman for the Dallas County District Attorney said the office typically doesn’t comment on any pending investigation. Hate crime statutes in Texas allow for more stringent penalties for crimes motivated by sexual orientation bias, but not for crimes motivated by bias against someone’s gender identity or expression, leading equality advocates to call for change. 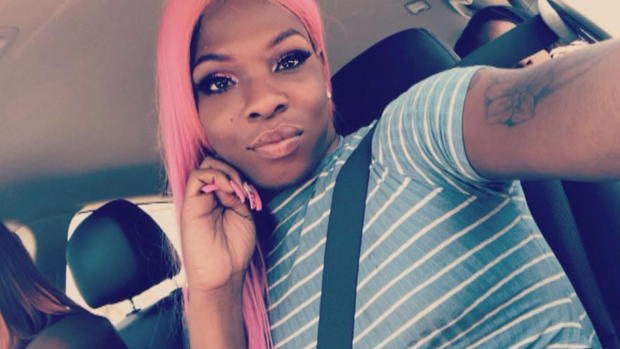 A month before her death, Booker was the victim of a brutal mob assault, and video of the attack went viral and drew national outrage. Authorities have said that attack is not linked to her murder.

When Lindsey was killed, Dallas police said they were “concerned” about the attacks on transgender women and had called in the FBI to help, but had no definitive evidence to link them. Dallas Police Major Vincent Weddington said in May that Booker’s slaying, the shooting death of a transgender woman in a car in October 2018 and a stabbing attack on a transgender woman in April all have “similarities,” and Dallas police now believe Lyles is also responsible for the stabbing attack, a spokeswoman told CBS News.

In another case, the death of a transgender woman who was found in a Dallas field in July 2017 remains open and is being investigated as an unexplained death.

Advocacy groups say attacks on transgender people in the U.S. are on the rise, “CBS This Morning” reported. Last year, the Human Rights Campaign tracked at least 26 deaths due to fatal violence. The majority of victims were black transgender women.

The Dallas Police Department issued a statement to CBS News saying it is committed to the public safety of all residents and understands the LGBTQ community’s concerns, “including the safety concerns of our transgender community both locally and nationally.”

“Our DPD LGBTQ+ Outreach efforts continue to provide us with an opportunity and avenue to proactively engage our LGBTQ+ residents so that we can quickly disseminate information,” the department said.