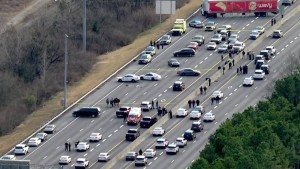 NASHVILLE, Tennessee (WDEF) – The Tennessee Bureau of Investigation is taking over the case of a man shot and killed by officers this afternoon on the interstate in Nashville.

Metro police say it started around 2PM (CST) when a state trooper stopped to deal with a man who was sitting on the guardrail on I-65 north.

Officials say the trooper was offering him a ride to get off of the interstate.

But the 37 year old man pushed away from the officer and produced a boxcutter.

Police describe him as highly agitated, but they did not know why.

Eventually, Metro police, more troopers and an off-duty Mount Juliet officer surrounded him and blocked off the interstate.

As drivers looked on, they tried to talk him down for about 30 minutes.

A spokesman says the man suddenly pulled a silver, shiny object from his pocket and 9 officers opened fire.

The object did not turn out to be a gun.

The following video posted by an onlooker has been edited to freeze the image as officers opened fire.