McCain leaves his mark on Hanoi, where he was shot down and held captive

Sen. John McCain, who died Saturday at the age of 81, was tortured and held captive for five and a half years as a prisoner of war during the Vietnam War, an experience that shaped the rest of his life. In Hanoi, McCain is etched in the city’s history, with a memorial at the lake where his plane crashed and at the prison — now a museum — where he was held captive.

McCain’s plane was shot down during a bombing run over North Vietnam in 1967, and he parachuted into a lake in what is now a busy part of Hanoi. Already badly injured, he was beaten and taken to a nearby prison called Hoa Lò, which the U.S. POWs nicknamed the Hanoi Hilton. He was refused medical treatment and beaten with a bayonet.

Hanoi residents held a memorial at the lake on Sunday, leaving flowers to remember the man who “fought for peace in many countries, including Vietnam,” as one onlooker told the Associated Press.

While holding him as a prisoner of war, the North Vietnamese tried to exploit the fact that his father was a prominent admiral at the time. They offered McCain an early release. But he refused, adhering to the military code of “first in, first out.”

On his 23rd bombing mission over North Vietnam, his plane was shot down. This Oct. 26, 1967, photograph shows Hanoi residents recovering him from the city’s Truc Bach lake. McCain said that upon capture he was struck, kicked, and bayoneted by several hundred Vietnamese before they were chased off by a nurse.

McCain was finally freed after five and a half years, two of which he spent in solitary confinement. He limped off the plane that returned him to the U.S. gripping a handrail and with hair that had turned white, according to a New York Times report from 1973 on his release. The injuries he sustained would affect his mobility for the rest of his life.

In June, Jared Dillingham of CBS Phoenix affiliate KPHO visited the section Truc Bach Lake where McCain crashed and what remains of the prison complex, which is now a museum mainly focused on Vietnam under French colonial rule.

McCain’s flight suit and parachute are on display, damaged but still in tact. They’re encased in a room full of Vietnamese propaganda, including videos about the “kind treatment” of the POWs, and photos of American prisoners playing sports, Dillingham said. Dillingham noted the museum whitewashes over the torture at the prison. 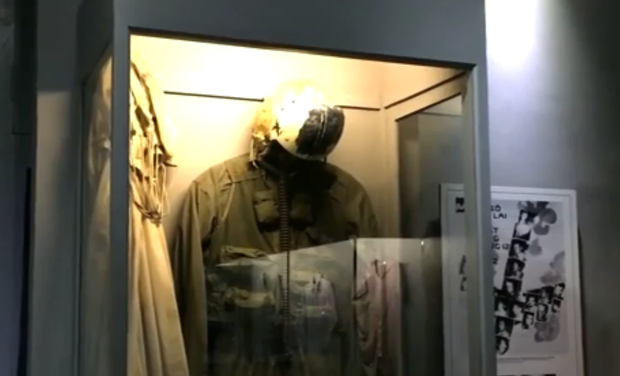 John McCain’s flight suit on display at a museum in Hanoi.

Many of the prison cells were preserved and are still standing, although it’s unclear if the cell where McCain was held is still among them.

At Truc Bach Lake, which is situated in the middle of modern-day Hanoi, there is a memorial that bears McCain’s name. He told C-SPAN in 1992 he “never understood” why the monument is there. “Why they erected it and the significance it has to them, I have never quite figured out,” he laughed.

McCain returned to Vietnam a number of times, and has even visited the Hanoi Hilton. He told C-SPAN it isn’t difficult for him to go back.

“There is no reason for me to hold a grudge or anger,” McCain said. “There’s certainly some individual guards who were very cruel and inflicted a lot of pain on me and others but there’s certainly no sense in me hating the Vietnamese … I hold no ill will toward them.”