Senate Majority Leader Mitch McConnell has agreed to hold a vote in August on a bill to fully fund the 9/11 Victims Compensation Fund, which helps those with illnesses related to the 2001 terror attacks, said 9/11 responders who met with McConnell Tuesday afternoon.

One of those first responders, John Feal, told reporters after the meeting that he was pleased with the result.

Feal said the group gave McConnell a badge belonging to Luis Alvarez, a first responder who is dying of cancer. He said the gesture was meant to ensure McConnell keeps his word.

“He’s got his badge now, so if he strays from his commitment, we’ll go back into attack mode,” an emotional Feal told reporters. “But for now we’re going to put down our swords and pick up our rakes and be with our friends who are sick and dying.”

McConnell had agreed to meet with the first responders to discuss the need to reauthorize the legislation first established nine years ago, It attracted attention recently after comedian Jon Stewart delivered a blistering rebuke of Congressional inaction on the measure just as the fund is running out of money. Feal was present for Stewart’s testimony earlier this month, during which Stewart at times broke down in tears, shouting at the lawmakers and calling them “shameful.”

“I can’t help but think what an incredible metaphor this room is … a filled room of 9/11 first responders and in front of me, a nearly empty Congress. Sick and dying, they brought themselves down here to speak to no one … shameful,” said Stewart.

Feal, who was a construction supervisor at Ground Zero and had part of his foot amputated after a steel beam fell on him at the site of the rubble, consoled Stewart at the emotional hearing, telling the comedian that members of Congress had “disrespected” the lives of first responders with their lack of interest in funding the measure.

After the meeting with McConnell, Feal slammed lawmakers for allowing politics to get in the way of providing the funds and noted that dozens of first responders had traveled to Washington to inform members of Congress and senators about their plight. 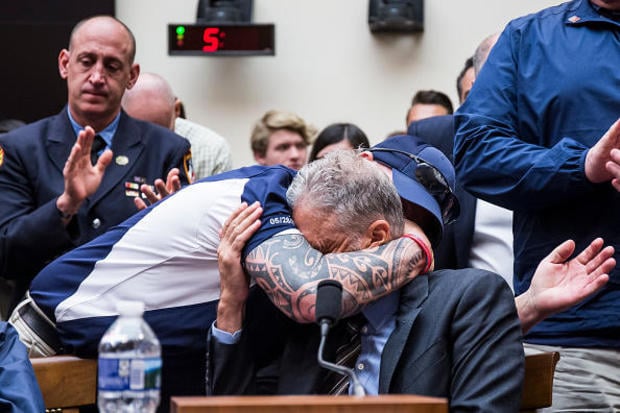 “It took a village to get 535 people to get their s**t together,” Feal said, referring to the 535 members of Congress. He added that while the bill has 60 cosponsors in the Senate and 327 in the House, there should be unanimous support for the bill.

“If they really wanted to impress us, there would be 535 cosponsors, if they got off their milky white asses,” Feal said. He apologized for cursing, saying that if he didn’t curse, he would cry. Feal said that he has attended 181 funerals for first responders.

Feal reiterated that if McConnell broke his word, he and the coalition of first responders would return to Washington to continue to lobby members of Congress.

“We’re sick and dying, we’re all going to die, but we’re not stupid,” Feal said.