Two prominent North Korean defectors told CBS News they were “disappointed” by President Trump’s summit with North Korean dictator Kim Jong Un last week in Singapore, but expressed hope in the American president’s efforts to usher in peace on the Korean Peninsula. With pageantry surrounding the historic meeting but scant mention of the regime’s brutal human rights record, activist Park Sang-hak wondered what had changed since Mr. Trump blasted Kim’s “sinister regime” and described the “horror of life in North Korea” in an address to the South Korean National Assembly last November.

“Maybe he was thinking about America’s national interests first, or forgot the contents of his address before the National Assembly in Seoul last year. I was very sad,” said Park, founder of Fighters for a Free North Korea. The son of a former North Korean spy who defected with his family to the South in 2000, Park is known for his work launching balloons with USB drives, transistor radios and pro-democracy literature into North Korea. He has been the target of two foiled assassination attempts by North Korean spies. 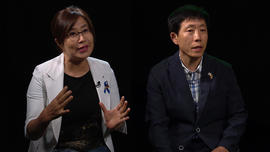 After reading the agreement Mr. Trump and Kim signed, Lee Ae-ran, founder of the Center for Liberty and Unification and Neungra Bapsang, wondered if Mr. Trump had been “fooled again like previous presidents.” But upon digesting Mr. Trump’s press conference post-summit, where he told reporters he had “discussed” the human rights abuses of the dynastic Kim regime “strongly” but “relatively briefly compared to denuclearization,” Lee said she became more understanding of the circumstances.

“It’s rough. It’s rough in a lot of places, by the way,” Mr. Trump said last Tuesday, adding, “I think it will change.”

According to a 2017 State Department report, the North Korean people have faced “egregious human rights violations by the government in nearly all reporting categories,” including extrajudicial killings, torture, political prison camps, coerced abortion, human trafficking, and denial of freedoms of speech, press, assembly, and religion, among other abuses.

The same day as his press conference, Mr. Trump drew criticism when he continued his praise for Kim. “He’s a funny guy, he’s very smart, he’s a great negotiator. He loves his people, not that I’m surprised by that, but he loves his people,” he told Voice of America.

Lee said she was “dumbfounded” by the statement, but took it as diplomatic rhetoric. She pointed to the gap between the leaders’ ages: Mr. Trump at 72 and Kim, believed to be 34.

“I felt like [President Trump] was pacifying a child. Could President Trump actually think Kim Jong Un ‘loves’ the North Korean people? If he loved them, that child would never act the way he does: killing anyone and terrorizing his brother in the broad daylight,” Lee said, referring to the assassination of Kim Jong Nam at Malaysia’s Kuala Lumpur International Airport.

Though Lee never lived in North Korea under Kim Jong Un, she hasn’t forgotten the extreme hardship she witnessed under his predecessors, his father and grandfather, before she fled in 1997 with her 4-month-old son. She described an instance where a dozen people fought outside her home over one mouse that was boiled for food. Children were dying of starvation in the streets, she said.

Now Lee, who went on to become the first defector to run for the South Korean National Assembly, is optimistic. She credited Mr. Trump for his diplomatic efforts.

“President Trump, in any case, dragged Kim Jong Un out, and pushed Kim himself to make an agreement in the international community. Whether that agreement will be carried out is something that we’ll have to observe,” she said.

Park, who now leads a federation of 32 South Korea-based organizations for North Korea defectors, said he hopes Mr. Trump will stand on the side of tens of millions of North Koreans who are “victims,” rather than with Kim Jong Un. Only if Kim dismantles his country’s notorious political prison camps will Park believe he can be trusted on promises to work toward the U.S. goal of complete, verifiable, and irreversible denuclearization.

“My sincere request to him would be that he stands on the side of the North Korean people with even a quarter of the mind of patriotism he has to ‘Make America Great Again,'” Park said.