The investigation found no hate crime had been committed.

The case began when a noose was found hanging in the garage of the African American driver on Sunday.

But a review found the rope was just a looped pull down rope for the garage door.

“Bubba Wallace and the 43 team had nothing to do with this” Phelps said on Thursday.

NASCAR released a photo of the noose today. 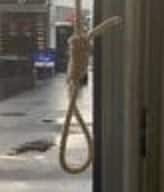 “As you can see from the photo, the noose was real, as was our concern for Bubba.”

People have questioned how a common pull down rope could have been mistaken for a noose, and several conspiracy theories have surfaced to explain it.

But NASCAR officials say they have asked all of their tracks to inspect every garage area.

Inspections of 1,684 garage stalls at 29 tracks found only 11 pull-down ropes tied in a knot.

And only one of them was in the shape of a noose… the one found at Talladega on Sunday.

Phelps admits he did make one mistake in how he handled the event.

“Upon learning of and seeing the noose, our initial reaction was to protect our driver,” Phelps said. “We’re living in a highly charged and emotional time. What we saw was a symbol of hate and was only present in one area of the garage and that was of the 43 car of Bubba Wallace. In hindsight, I should have used the word ‘alleged’ in our statement.

Of course, NASCAR is on edge now about racial issues as Bubba Wallace has become more outspoken and they have banned fans bringing confederate flags to the tracks.

NASCAR has ordered sensitivity and unconscious bias training for all members of the industry, along with more cameras in garage areas.

“Our ultimate conclusion for this investigation is to ensure that this never happens again, that no one walks by a noose without recognizing the potential damage it can do,” Phelps said. “Going forward, our efforts are best spent on making sure every competitor feels safe and every guest feels welcome. I would also like to reinforce that what we did see at Talladega in pre-race on Monday, our drivers, crews and officials proudly demonstrated that we are united in the belief that there is no place for racism in our sport.”