RINGGOLD, Georgia (WDEF) – For months Parkridge has been halting the construction of a new CHI Memorial Northwest Georgia hospital, by filing an appeal to a decision made by the State of Georgia approving the new hospital’s certificate of need. Certificate of Need (CON) laws are meant for approving major health care facilities. The Georgia state policy for CON is that “health care services and facilities should be provided in a manner that avoids unnecessary duplication of services, that is cost effective, that provides quality health care services, and that is compatible with the health care needs of the various areas and populations of the state.”

Parkridge is arguing that Northwest Georgia is already served by their Tennessee hospitals. In a statement provided by Parkridge, the hospital said, “Parkridge Health is committed to providing the highest quality healthcare to all patients we serve. We are proud to support and care for the Georgia community, as we have done for close to 50 years. CHI Memorial’s proposed new hospital duplicates services in a region that is already well-served and reduces access to care for the patient base historically served by CHI Memorial Hospital Georgia.”

Chuck Harris is a Catoosa County Commissioner. He argues that a Tennessee Hospital should have no say when it comes to a Georgia Hospital.

“Well, a CON has stalled construction in some places for up to seven years. We’re asking Parkridge not to do that. A CON  has never been successfully challenged and stopped the construction, it’s just postponing this construction. We look at that as that is a way for that hospital and Tennessee to keep generating revenue every day. They hold up construction as another day of revenue they get from North Georgia citizens,” said Harris. “The North Georgian citizens are getting tired of that. They are starting to push back. In fact, there’s a citizen coalition right now formed that are going to want to start fighting Parkridge and we don’t want that as elected official. We want Parkridge to be a great healthcare partner for the citizens of North Georgia.”

In a poll funded by CHI and conducted by New South Research out of Birmingham that surveyed 450 adults living in Catoosa, Dade, Walker, and Hamilton County. Almost 89% felt that a hospital in Tennessee should not be able to block the replacement of an aging hospital in Georgia. What CHI Memorial’s Chief Strategist Andrew McGill found most surprising from the survey was how few citizens were unaware of Parkridge’s appeal to the construction.

“One piece of information we found was a lot of people didn’t really realize that we have a CON, but that we could not move forward because Parkridge had filed its appeal. So the surprise was they didn’t know, but also, we were not surprised by the fact that people feel like it’s that decision should be made at home,” said McGill. 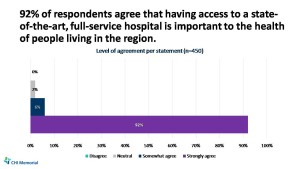 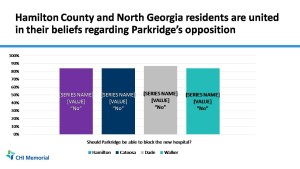 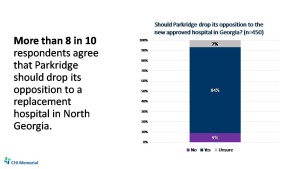 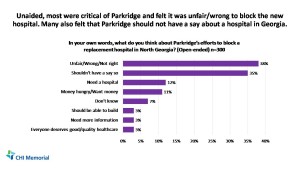 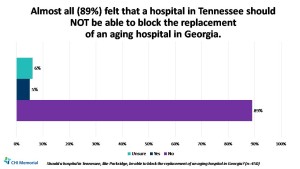 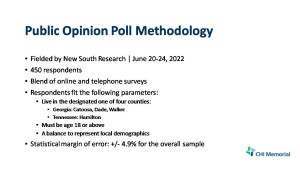