“Our search and rescue volunteers give us themselves and their time selflessly to try to rescue folks that have become lost. And this is an example of what they are willing to give,” said San Bernardo County Sheriff John McMahon.

According to SBCSD, Staples was lost after being separated from his partner on Saturday afternoon in the area northwest of Los Angeles. An air search later located him unresponsive on the ice and snow. A medic was lowered down from a helicopter and determined that Staples was dead. It’s believed he may have taken a fatal fall on one of the notoriously narrow, ice covered trails.

Staples was one of the 126 people working in 23 teams searching large sections of Mount Baldy for the missing hiker, Sree Mokkapati, of Irvine, last seen December 8 hiking on Mount Baldy. 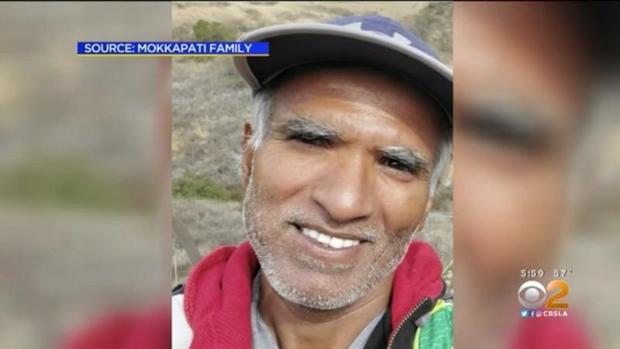 Sree Mokkapati, 52, has been missing since December 8, 2019, when he was separated from his hiking group on Mount Baldy. Mokkapati via CBS L.A.

Mokkapati, 52, was hiking that weekend with some friends, but when his group decided they wanted to turn around, he said he wanted to keep heading toward the summit alone. And when he failed to return to his car that afternoon, his friends got worried and called for help.

“We hope to find him soon, and we’re praying that he comes back home safely and sound,” Shravan Mokkapati, the man’s son, said. “And we wish he takes whatever precautions he has to take to survive out there.”

Along with search teams from local law enforcement agencies, the family has hired a private helicopter to help search for the man who the family said was an experienced hiker with knowledge of the mountain.

“He has sticks, and he has clamps,” his son said. “A lot of the gear you need to survive out here in the snow.”

The newly-married Staples was also a beloved teacher at La Verne’s Damien High School, which is planning a prayer service for him Monday. Students held a candlelight vigil for Staples at the school Saturday night.