NFL players Michael Thomas, Austin Carr and Ryan Hunter are used to running, blocking or catching for a living. But for the last couple of weeks, they have been running around the halls of Congress, tackling the big issues facing the country.

“I’ve been fortunate to sit in on meetings with foreign policy administrators from the Middle East, whether it be constituents from the state of Missouri and the city of Kansas City, St. Louis,” said Hunter, an offensive lineman for the Kansas City Chiefs. He’s interning for freshman Sen. Josh Hawley of Missouri.

“This is fun because we’re both new together. So Ryan’s new, I’m new. We’re kind of learning the ropes together,” said Hawley, a Republican. “I think it’s phenomenal that NFL players like Ryan, who are very busy guys and have a career that they’re pursuing, want to be involved in their communities, want to be involved in service.”

Michael Thomas plays safety for the New York Giants. This is his second time working for Democratic Rep. Sheila Jackson Lee, who represents his district in Houston, Texas.

“What a better place to be, not necessarily only in my office but in many offices, where they can be change agents and translate that leadership on the field into making a difference,” said Jackson Lee.

“After interning last year, I was like, I got to come back, because I saw firsthand what she’s doing. And how much she’s really on the ground, you know, like putting in the work,” Thomas said. “A lot of things that we were fighting for, from criminal justice reform, bail reform, education, reentry with juvenile detentions and stuff like that, she’s already had bills written. You know, they’re on the floor, she’s proposing these things. So I’m like, ‘OK, this is how we can take that next step.'”

Austin Carr is a wide receiver for the New Orleans Saints. He is pro-life and interested in some libertarian ideas, which is why he is interning for Kentucky Sen. Rand Paul.

“I’m seeing how hard they work and in particular Sen. Rand Paul, how often he’s running to and fro to different meetings, different committees, meeting with constituents,” said Carr.

“We’re glad to have him here. And I think it’s good to see another side of our athletes,” Paul said of Carr’s internship. 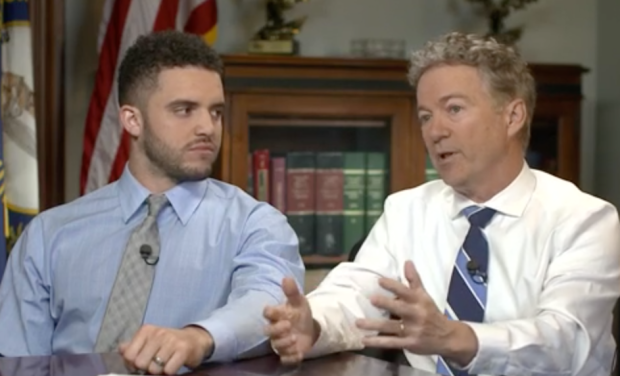 According to the NFL Players Association, the average NFL career lasts just under four years. In 2014, the union started an externship program to prepare players for life after the NFL. Since then, 183 players have had on-the-job training in a variety of fields.

Thomas is a member of the union’s executive board. He sees this as an opportunity to speak for his community. He was one of the players who protested police brutality by kneeling during the national anthem.

“Me being here, being in the inside interning, I see the steps that need to be taken. I’m willing to put in the work. I’m willing to advocate for it. I’m willing to help out Congresswoman Jackson Lee any way I can, using my voice and my platform, same way I did it on a football field in taking a knee,” said Thomas.

Carr met with the attorney general of Louisiana to talk about the opioid crisis. Hunter learned more about brain injuries after meeting with the Society for Neuroscience.

“I’d rather be here than be in the Bahamas because I’m learning so much for the future, that this experience in its own beats having an umbrella drink on the beach,” said Hunter.

“I’m glad to see that Austin believes strongly in his faith and that it sounds like he wants to be part of trying to make things better in the country but also be an example for, you know, kids out there that look up to our stars,” said Paul.

“Having players say, ‘I want to be involved. I want to serve. I want to see it from the inside. I want to do something about that.’ That’s awesome. We need more of that. And I think Ryan’s a great example,” Hawley said.

“I hope he will be able to be here when we are seeing these bills passed out of the House and the Senate, where we have changed the criminal justice system. Wouldn’t that be great? That’s my heart and passion, and I hope he will be part of it,” said Jackson Lee.