“Nothing impossible”: Blind Army vet runs with the bulls at Pamplona

This morning in our series “Pushing the Limits,” we introduce you to an especially brave runner taking part in this year’s “Running of the Bulls” at the San Fermin festival in Spain.

A 1,000-pound enemy … charging the front line … and a stampede of uniformed men, tempting fate. Writer Ernest Hemingway once compared Pamplona’s “Running of the Bulls” to a battlefield.

Which means for the first time since 2006, Major Ivan Castro, former U.S. Special Forces, went back to a war zone. “It is like a mission, and it is a battlefield for me,” Castro said. “You know, I don’t know when this thing is coming. I’ve got to rely on the eyes of others.”

Because Castro is about to run with the bulls … blind.

The famous and dangerous annual event in Pamplona dates back more than 700 years, when bulls were reared for fighting and ran through the city to reach the bullring. Townspeople would jump in their path as a show of bravery.

Now, Castro is taking this high-risk tradition to a new level. 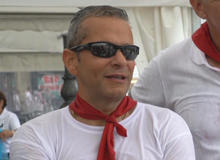 “Yeah, I hear that all the time,” he replied.

“And what do you say to them?”

“You gotta live life on the edge, and live to the fullest, and life is too short!”

Castro was deployed in Iraq in 2006 when his team came under a mortar attack. Two of his brothers-in-arms were killed. The blast caused Castro to lose complete vision in both eyes.

“Not being able to deploy, not being able to jump out of planes no more the way I did before, I miss that, I miss that excitement, that adrenalin,” he said. “And I think that every year I need something to do to stay focused, to train in order to feel alive, you know?”

So he trained – for marathons at first, then ultra-marathons. He journeyed to the South Pole with Prince Harry; climbed Mount Kilimanjaro; and just finished the El Camino de Santiago, a 400-mile-long pilgrimage across Spain.

He arrived just in time for Pamplona’s San Fermin festival, the weeklong, non-stop celebration of life and death. For some, it’s a coming-of-age, for others a tested tradition.

Guided by friends, retired U.S. Army Major Ivan Castro runs with the bulls in Pamplona, Spain. After losing his sight in Iraq, Castro continues to test his limits – and grab life by the horns.

For Castro, it’s a second chance to outrun danger.

“Running a marathon, you just put one foot in front of another and don’t quit, and eventually you cross the finish line,” he said. “But the finish line here is not getting gored!”

And with the opening of the gates, the battle begins.

He was swallowed by the frenzy, but as others tumbled like bowling pins, Castro stood his ground.

He’s guided through the darkness by his friends, Colonel Fred Dummar and David Kaiser. 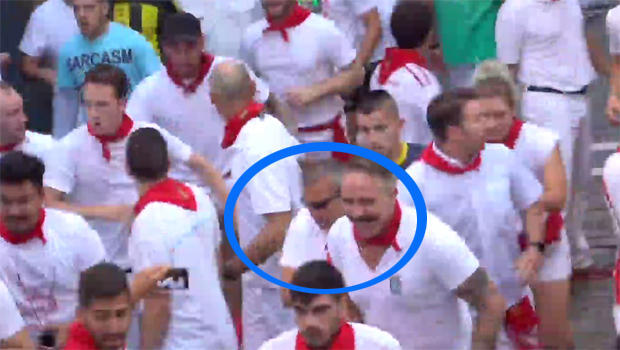 Guided by friends, retired Army Major Ivan Castro, who lost his eyesight in Iraq, runs with the bulls in Pamplona, Spain.

“You could hear the bulls go by – just swipe by you, and then you could hear the people as well, the panic, the fear – people running in total fear,” Castro said. “And being blind, you just don’t know what’s coming. Is that bull right behind me? Or is he five feet behind me? An inch?”

In the end he escaped from the half-mile sprint uninjured: “Never, ever did I [think] I was gonna run with the bulls!”

Vigliotti asked, “Has this experience taught you something new about yourself?”

He replied, “There’s nothing impossible!”

A soldier battling back, and grabbing life by the horns.

The Running of the Bulls continues for the rest of the week, but Castro has said he’s pushed his limits – and luck! – for now. His next challenge he hopes will bring him all the way to the North Pole.