It does NOT identify a “Probable Cause” at this point.

The report details what they know of how a utility truck swerved into the path of the bus last October.

The bus driver and a student onboard were killed and 8 other students taken to the hospital.

Investigators are still reviewing video from the bus and training histories of both drivers before concluding their findings.

“The NTSB continues to gather information on the actions of the truck driver, issues related to the protection of school bus occupants, and roadway and pavement maintenance.”

Here is the full preliminary report:

On Tuesday, October 27, 2020, about 3:45 p.m. eastern standard time, a two-vehicle collision occurred in the southbound lane of State Highway 58 (SH-58) in Decatur, Meigs County, Tennessee. In that area, the highway has one lane in each direction. The lanes are separated by a double yellow centerline, with rumble strips milled along the edges of both lanes. The highway has a posted speed limit of 55 mph.

A 2013 Thomas Built transit style 78-passenger school bus was southbound on SH-58, carrying 22 K‑12 students home from school. At the same time, a 2018 Freightliner truck, configured as a service vehicle for a local utility company and equipped with a boom arm, was traveling north. In the 7700 block of SH-58, the truck drifted off the right edge of the pavement and the right tires went into the ditch. The truck driver reported that it happened while he looked in his mirror. As the driver steered back onto the roadway, the truck yawed counterclockwise and crossed into the southbound lane, in front of the school bus. The bus collided with the right side of the truck, between the rear axle and the front of the utility box, and also hit the right side of the boom arm. The bus came to rest in the southbound lane. The truck continued across the highway into the trees, coming to rest off the west side of the road. Figure 1 is an aerial view of the final rest positions of the two vehicles. Figure 2 shows the damage to the truck. 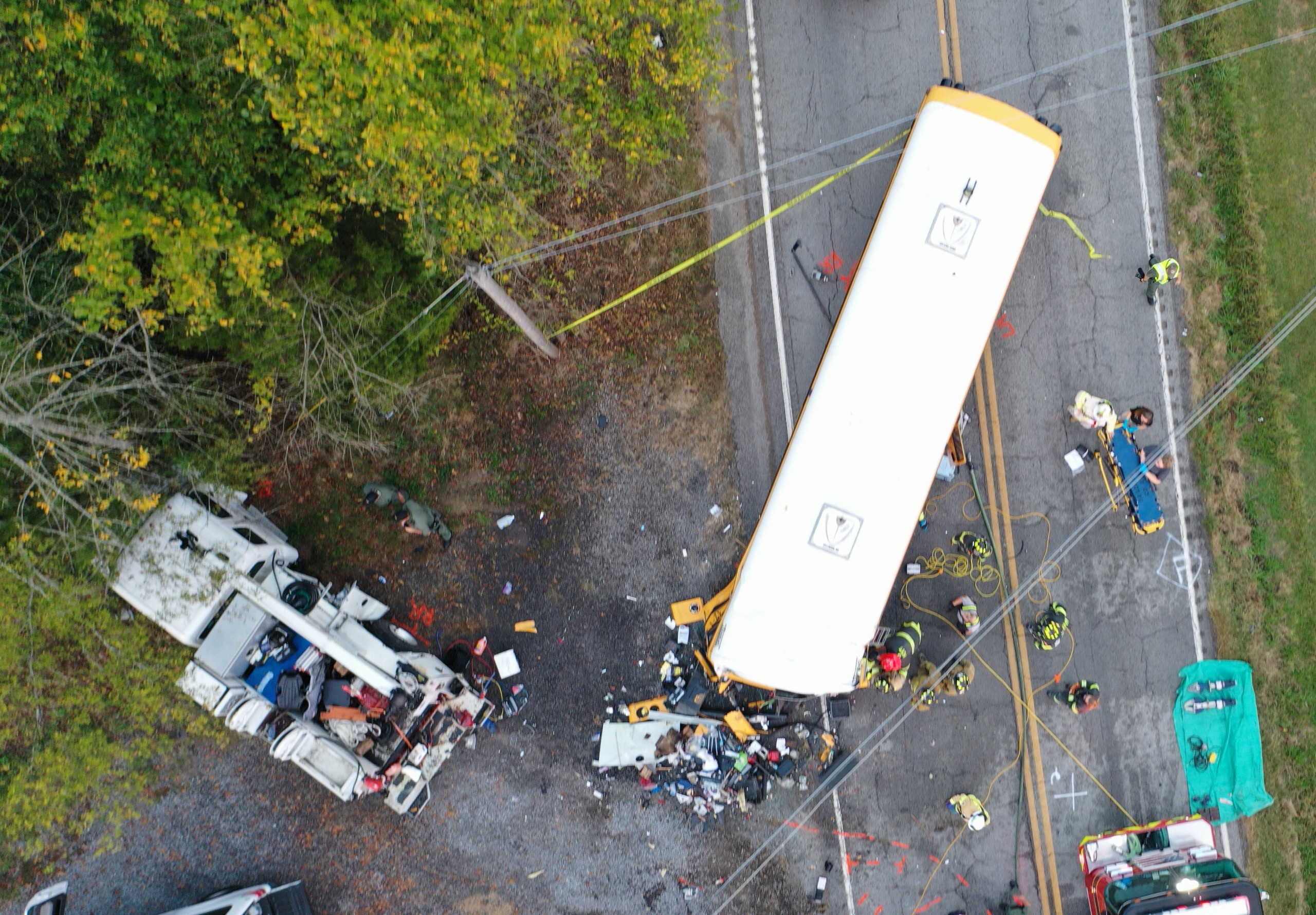 The 53-year-old bus driver and a 7-year-old student passenger seated directly behind her were trapped in the bus and had to be extricated. Both were fatally injured. Eight other student passengers were transported to local hospitals for treatment. The truck driver was treated at the scene for minor injuries. The school bus was not equipped with passenger seat belts.

Preliminary information indicates that the drivers of both vehicles were properly licensed. The National Transportation Safety Board (NTSB) is gathering records on the training and qualifications of both drivers. The school bus was equipped with several onboard cameras. The videos from the cameras are being evaluated for preimpact views inside and outside the bus.

The NTSB continues to gather information on the actions of the truck driver, issues related to the protection of school bus occupants, and roadway and pavement maintenance. All aspects of the crash remain under investigation as the NTSB determines the probable cause, with the intent of issuing safety recommendations to prevent similar crashes. The NTSB is working alongside the Tennessee Highway Patrol, which is conducting a separate, parallel investigation. The Federal Motor Carrier Safety Administration and Daimler Trucks North America are parties to the investigation. 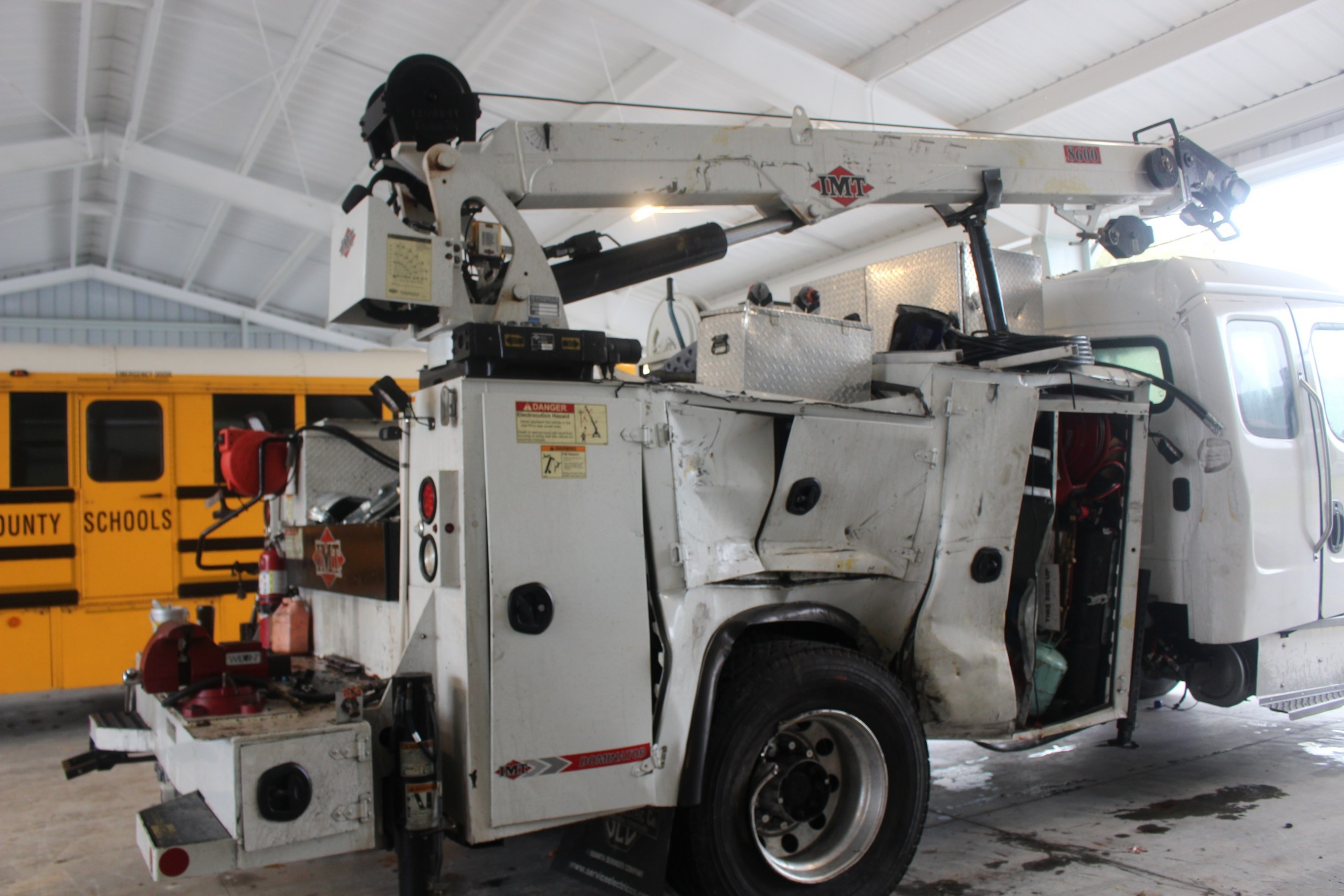 Damage to right side of truck. (Source: Tennessee Highway Patrol)