As those fighting climate change look toward grand government schemes such as the Green New Deal, little Holyoke, Massachusetts, is showing how to make the kinds of on-the-ground transformations needed to win the war.

How this city of just 40,000 went from having the last coal-powered plant in Massachusetts to laying claim to its largest solar farm might prove a valuable blueprint as more cities and states set goals for 100 percent renewable energy. It wasn’t easy, and it certainly didn’t happen overnight. But thanks to a lot of foresight and the recognition that the time had come to actively prepare for a future quite different from the past, Holyoke made a series of conscious decisions that are already paying off.

From coal power to sun power: the new solar farm at Mt. Tom in Holyoke, Massachusetts

Holyoke and the former Mt. Tom coal plant site skirt the Connecticut River in Massachusetts’ Pioneer Valley, just east of the Berkshires. The first planned industrial city in the nation, Holyoke was once the world’s biggest paper producer and is nicknamed “Paper City,” according to the Holyoke website.

For half a century, the coal plant at Mt. Tom churned out electricity for Holyoke’s factories. It also emitted pollutants typical of coal plants.

Historically a city of immigrants, Holyoke remains diverse. About half of its residents identify as Latino or Hispanic, and nearly 30 percent live in poverty, according to U.S. Census figures. When the coal plant was operating, asthma rates were roughly twice that of the state average, and residents had long complained about health issues.

By 2010, the plant’s profits were shrinking as natural gas became more popular, and by then only a couple dozen employees remained. State and federal emissions rules made it even more expensive to operate. 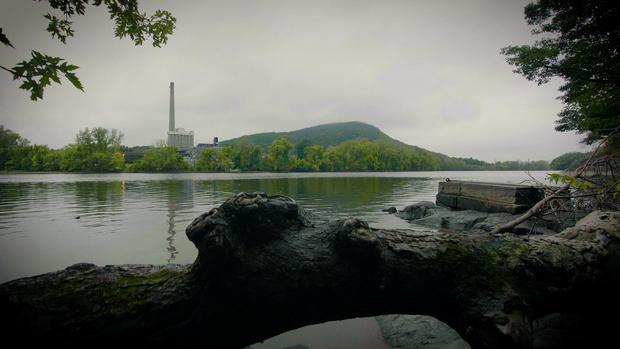 In 2014, the plant finally shut down. But Holyoke was ready for the opportunity to begin the community’s transition to cleaner power. Although that effort took years to bear fruit, today Mt. Tom is home to a solar farm made up of 17,000 panels, the state’s largest.

ENGIE, the solar plant’s operator that sends electricity to the local power grid, also runs a 3-megawatt electricity storage facility at Mt. Tom that opened last year. Storage units take electricity generated from wind and solar installations and release it to the grid when it’s needed.

Holyoke Gas & Electric, the utility that sells electricity to Holyoke’s residents and is owned by the city, now gets roughly 90 percent of that power from carbon-free sources, including nuclear energy. More than two-thirds of it now comes from renewable sources like ENGIE’s solar farm, hydro and wind, according to the HG&E 2017 annual report. Massachusetts no longer has any fully operating coal plants.

“Writing was on the wall”

Holyoke’s path away from coal toward renewable sources involved several constituencies: local activists, residents, former plant employees and elected officials. A key to their success was that these groups organized early — before the decision to shut down Mt. Tom was official.

“What’s unique about this situation is that the writing was on the wall that this plant was going to close down,” said Aaron Vega, a Massachusetts state representative who was a member of the Holyoke city council when it first seemed likely that ENGIE (then GDF Suez) was getting ready a decade ago to close the plant.

Mt. Tom had been operating only when demand for electricity was at its height — the least efficient way to run. Power plant operators like ENGIE send electricity via the grid to utilities like HG&E, which in turn sell it to customers in the area they serve, in this case Holyoke. So when ENGIE rescinded its request with the city of Holyoke for paving permits at Mt. Tom, it was a tip-off that the plant’s shutdown was near.

“It became this really exciting opportunity where the community came together,” Vega said.

Learning from other activists

Lena Entin is a community organizer who worked with local resident group Neighbor to Neighbor. She now works with Toxics Action Center, another group that mobilized in Holyoke. On the other side of the state, a coal plant in coastal Salem was planning to close and convert to natural gas, something Entin said the Holyoke community didn’t want. The group saw its opening.

“What we learned from talking to activists and from Toxic Action Center’s experience in these places is that we needed to have a review study — a feasibility study done on-site before the company even announced it was closing,” Entin said. “We didn’t want [the plant] to close and stay on-line to possibly open later. Our thinking was, ‘Who knows if the economy is going to turn around.’ We didn’t know that. We didn’t want some opportunity to come up or risk that the new administration would come in and welcome coal.”

The Sierra Club’s anti-coal campaign, called “Beyond Coal,” also got involved, offering expertise gleaned from other campaigns. Union members pushed for meetings with plant officials to secure older workers a “bridge” to retirement benefits, better severance and potential training for new jobs or transfers within the company. City officials also pushed for a meeting at the plant. Pressure grew.

“That was a really big thing,” said Kay, who helped negotiate the settlements. “Generally speaking, the company did a pretty good job giving most of us what we needed during such a tough transition.”

A global company, ENGIE was already pulling back from coal plants worldwide and stopped operating them in the U.S. altogether in 2015, according to the company’s annual report for that year. So while the Trump administration favors coal and has made its revival an energy priority, Holyoke was a step ahead of the change in federal-level policy.

“Holyoke, we think, is an excellent example working well with the mayor and other public officials, with environmentalists and with our customer, Holyoke Gas & Electric, to transform a coal operation that had been in place since 1960 to something much more clean and modern,” ENGIE spokeswoman Julie Vitek told CBS MoneyWatch.

“Bigger than our city”

Holyoke Mayor Alex Morse said securing $100,000 from the state for a reuse study for the 128-acre Mt. Tom site was key to closing the plant in a “responsible way.” For Morse, that included crucial approvals from residents, employees, activists, and city and plant officials to make sure planning was well underway when the plant shut down.

“As mayor, you have to think holistically about what impact closing the coal plant would have in terms of tax revenues, loss of jobs,” Morse said. He has separately pursued new ways to bring in revenue for Holyoke, including embracing Massachusetts’ newly legal cannabis industry.

At the time of its closure, Mt. Tom was providing Holyoke with $315,000 in annual taxes, according to the reuse study. That report allowed for all the interested groups to “come up with a set of principles that most folks in the community” could support, Morse said. Having a city-owned electric utility also helped because profit is a lower priority than serving the community, Morse said.

State and federal support is critical because an individual city like Holyoke is just “one small piece” of the puzzle when it comes to climate change, said Morse, a Holyoke native first elected mayor at age 22 and now in his fourth term. The electricity storage facility was paid for in part through a state grant that will also be used to schedule, measure and analyze how well it’s is working, according to Holyoke Gas & Electric.

“Without the rest of the planet — our region, or state and our country — our efforts are being done in vain,” Morse said when asked if Holyoke serves as a model for communities looking to plug into the Green New Deal. “We need this on a seriously bigger scale,” he said. “Because we can’t just protect Holyoke from climate change disasters on our own. It’s so much bigger than just our city.”