Piling up: Drowning in a sea of plastic

Piece by piece, an environmental threat is piling up, and we’re ALL to blame. Worse yet, even those of us trying to bring an end to the problem may not be doing as much good as we think. David Pogue reports our Cover Story:

In the 1950s, a new material burst onto the scene that would change the world forever. Cheap, durable, sanitary, strong, and light.

And today, there are literally thousands of raw categories of plastic, according to Fred Betke, founder of Delta Pacific Products, which makes plastic parts for medical instruments.

The technical name is polypropylene, and all almost everything plastic starts out as pellets. They’re available in every color under the sun.

Delta Pacific’s clients specify the exact design of the parts they want. Hot plastic gets injected into heavy steel molds.

From pellets to molded plastic parts.

After 65 years of making plastic, we’ve pretty much mastered the art. What we haven’t yet figured out is what to do with plastic once we’re done with it.

“It lasts a really long time,” said Roland Geyer, professor of environmental science at UC Santa Barbara. “It doesn’t biodegrade. So, it just sits there.”

Geyer has studied how much plastic we throw away. “We have statistics reaching all the way back to the dawn of plastic mass production, 1950. And if we add it all together, it’s 8.3 billion metric tons. So, if we take that and spread it out evenly over California, the entire state of California would be covered. And that would be an ugly sight.” 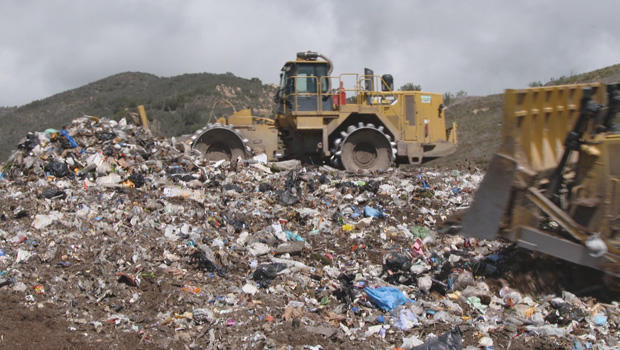 About 70 percent of our discarded plastic winds up in open dumps or landfills.

“So, a plastic bag probably used once between the cash register and the car, and then how long will it be here in the landfill?” asked Pogue.

“It will be with us for hundreds of years,” Geyer said. 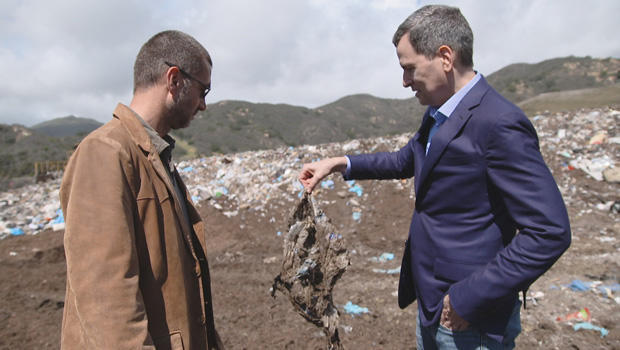 Environmental science professor Roland Geyer and correspondent David Pogue at a landfill, with a piece of plastic that isn’t biodegrading any time soon.

But some plastic winds up in an even worse place: The ocean. “Every single year, somewhere between 5 and 12 million metric tons of plastic waste enters the ocean,” Geyer said. “Plastic in the ocean has a tendency to break down into other smaller pieces. And these tiny pieces then get taken up even lower down in the food chain. So, we know that it ends up on our dinner plates.”

“Wait a minute – there’s plastic in my food?” asked Pogue.

In fact, at this rate, the World Economic Forum predicts that by 2050, our oceans will contain more plastic than fish. 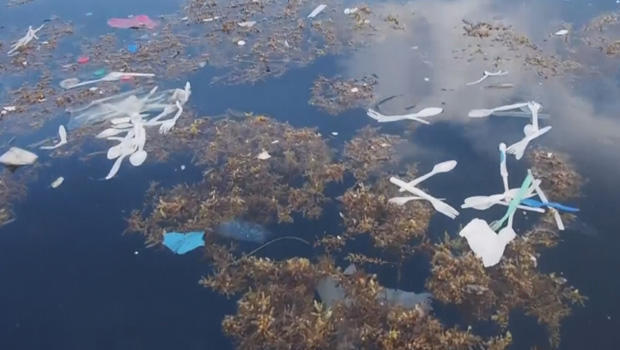 A floating island of plastic waste off the coast of Honduras. Because plastics do not biodegrade, much of our waste that is not recycled ends up in landfills or the ocean.

But wait a minute: Don’t most people recycle plastic? Not exactly. Geyer says that as of 2017, the world recycles only about 9 percent of all our plastic.

Even if you’re good about using your recycling bin, your plastic may never actually get recycled. Its first stop is a material recovery facility, where metal, glass, paper and plastic get sorted. 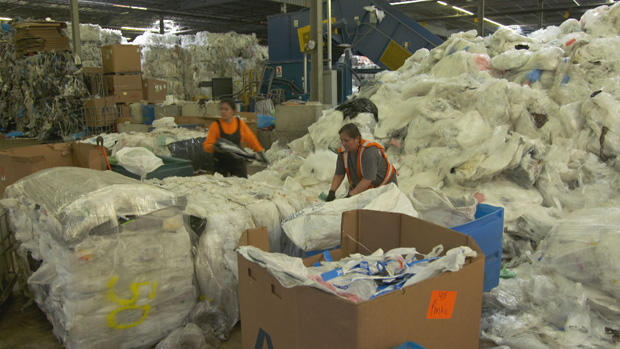 “We sort everything,” said Sunil Bagaria, the cofounder of GDB International, a corporate recycling facility in New Jersey. His staff sorts the plastic by type, and then wraps it into huge bales.  “We will sort hangers. We will sort plastic film. We will sort soda bottles, pill bottles, and make individual bales of each plastic.

“Then it is going to another factory, which is then washing it, grinding, pelletizing it. Then from there it will go to another company which will make another product or maybe blowing another bottle.”

It’s easy and economical to recycle clean, pure plastic. But well over half of the plastic we throw in our bins is contaminated by food, paper labels, or other materials.

For 30 years, we’ve had an easy solution for disposing of that dirty plastic: Send it to China. “China was buying 50% of all graded plastic scrap in the world,” Bagaria said. “Now, that continued for, say, 20, 30 years.  And then there was I think a movie made by somebody, ‘Plastic China.'”

The 2017 documentary “Plastic China” illustrated the brutal truth about the contaminated plastic that developed nations were selling to China. It showed a desperately poor Chinese family eking out a living by hand-sorting these mountains of plastic trash.

“So the Chinese government, the Communist Party is waking up and saying, ‘Why are we doing this?'” Bagaria said.

“Yes, there is national pride.”

So, the Chinese government announced a new policy. Staring on January 1 of this year, China stopped accepting other countries’ plastic unless it is impossibly pure. “If you are sending any scrap it should not have more than 0.5% of foreign matter,” Bagaria said.

“Pure plastic. And that was obviously unattainable.” 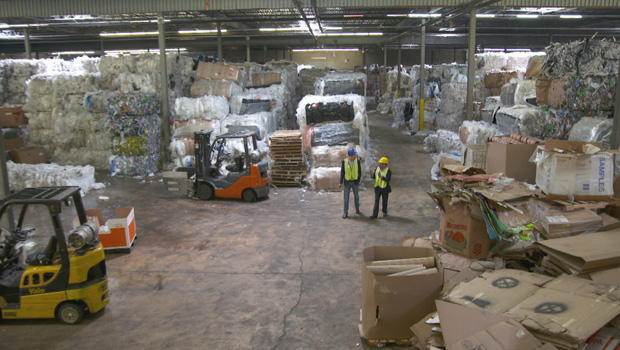 In his plant, Bagaria showed Pogue why. A lot of plastic come to recyclers like Bagaria all mixed together, impossible to separate cost effectively.

So, what happens now to the plastic we used to ship to China? Nothing. It’s just piling up.

“We still have large volumes of the types of plastic that nobody will buy, sitting, waiting for somebody to buy them,” said Clay Warner, the recycling manager at Garten Services in Salem, Oregon. “And then you have to decide how long you’re gonna hold on to it before you end up throwing it away.”

The town had to ask the public to stop putting certain plastic types into their recycling bins. 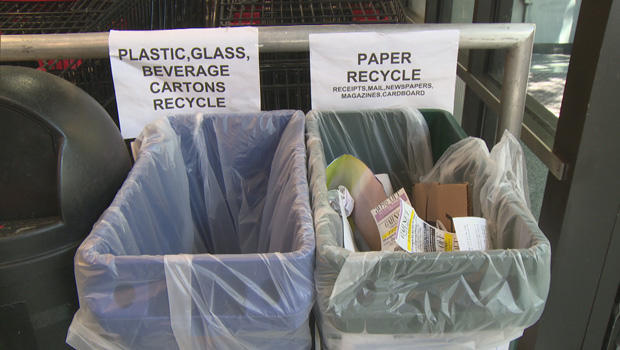 “The first, initial reaction from the public was outrage – What do you mean we can’t recycle these plastics?” said Warner.

Meanwhile, smaller recycling centers are simply going out of business.

Some larger facilities, like Sunil Bagaria’s, have decided to process the contaminated plastic themselves.

“Earlier we were making money by selling it to China. Now we are making more money by keeping this here, sorting it, and making plastic pellets out of it,” Bagaria said. “This China problem is a blessing in disguise.”

In the big picture, though, it will take effort from every stakeholder to fix plastic’s problem. Recycler Clay Warner says that government should play a part.

“I do think, in my own opinion, that we do need to ban certain plastics and packaging,” Warner said. 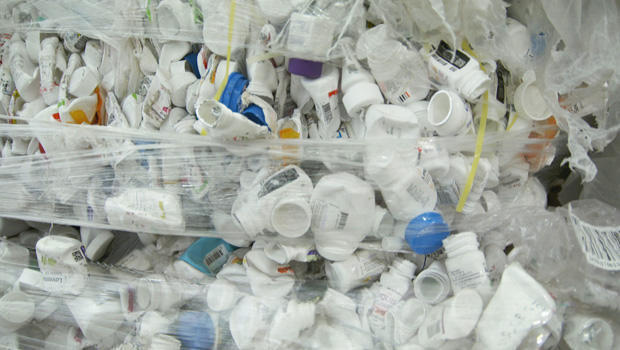 Bagaria says that corporations play a part. “Like McDonald’s, they have announced that by 2025, ‘all our packaging will be made from recycled plastic.'”

“Yes, the industry’s trying to address it. Polymers are being developed that, you know, the knives and spoons and forks that we see in some of the fast foods, they’ve gone to those polymers which are biodegradable. It has to happen. I mean, this [indicating the world] is all we’ve got, right?”

Bagaria added, “We cannot imagine life without plastics. But we cannot continue to lead our life the way we are.  It’s not like, ‘Oh, let’s use this planet Earth, then we will move to another planet.’ No, this is what we have. We need to take care of this.”