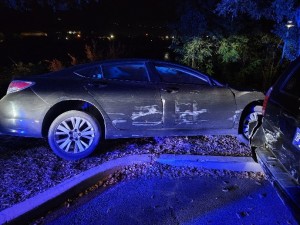 CHATTANOOGA (WDEF) – Chattanooga Police chased and captured a couple of young teens involved in a carjacking downtown on Wednesday night.

Police say the carjacking happened in the Entertainment District.

Officers chased the driver for a short distance until the fleeing vehicle crashed.

They say the driver suffered a head injury from the crash.

The two suspects in the vehicle were just 14 and 15 years old.

The driver will be charged with carjacking, evading arrest, leaving the scene of an accident, reckless endangerment and driving without a license.