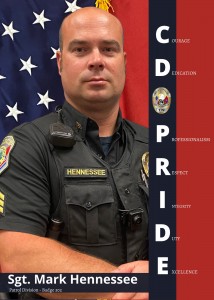 Collegedale Police have identified the officer who was hit by a vehicle while directing traffic at Ooltewah Middle School this afternoon.
Sergeant Mark Hennessee was taken to the hospital with non-life threatening injuries.
“Chief Sapp extends his appreciation for the many prayers of support, as well as for the swift response from the Hamilton County Sheriff’s Office, Tri-Community Fire Department, and Hamilton County EMS to assist our agency this afternoon.”
_______________
COLLEGEDALE, Tennessee (WDEF) – Collegedale police report that one of their officers directing traffic outside a school was hit by a vehicle this afternoon.
It happened around 3:30 outside Ooltewah Middle School.
Police say the officer was taken to the hospital with what appears to be non-life threatening injuries.
The scene was shutdown a couple of hours for investigators.
The Hamilton County Sheriff’s Office is handling the investigation.
Categories: Collegedale, Featured, Hamilton County, Local News
Tags: Ooltewah Middle School

Crews Working to Clean Up Train Crash Wreckage in Collegedale