Puerto Rico’s beleaguered Gov. Ricardo Rosselló announced on Sunday he will not seek reelection next year and will relinquish his role as the head of one of the main political parties on the island. He nevertheless vowed to stay in office for the remainder of his term, despite days of large-scale protests calling for his immediate resignation.

The 40-year-old governor, an ardent backer of Puerto Rican statehood, has been under increased scrutiny since a high-profile federal corruption probe led to the arrests of two of his former cabinet members and after the release of vulgar, sexist and inappropriate private messages sent in a chat by Rosselló and his top lieutenants.

“I recognize that apologizing is not sufficient,” Rosselló said in a livestream on social media. “And only my work will help restore the trust of these sectors and embark on a real reconciliation.”

Rosselló also said in his remarks that he’s ready to face a potential effort by the island’s legislature to initiate impeachment proceedings and remove him from office.

Although his decision to end his reelection bid in 2020 and resign from his position as president of the pro-statehood New Progressive Party might quell some concerns, it is unlikely to satisfy the spirited movement that has coalesced on the U.S. territory — home to approximately 3.2 million U.S. citizens — with the objective of ousting him from office and ushering reform to the island’s government, which has faced allegations of corruption and mismanagement for years.

Former New York City Council Speaker Melissa Mark-Viverito, one of the most prominent Puerto Rican politicians in the mainland and a target of sexist comments in the leaked chat Rosselló was part of, said the governor’s move is not enough. She faulted Rosselló — who called her a “whore” in the leaked messages — for failing to fully address the public’s myriad of grievances in his statement on Sunday.

“People don’t want to hear that. There’s a clear sign that people will not accept anything other than his resignation,” Mark-Viverito told CBS News. “And the fact that he refuses to do that is irresponsible. It’s anti-Democratic and it’s just fueling the tensions.”

“The only choice he has is to resign,” she added. “That is what the call of the people is about.”

For nine straight days and nights, thousands of protestors have mobilized to organize large-scale rallies, including several outside the governor’s mansion in San Juan’s colonial neighborhood. One massive, star-studded demonstration drew between 100,000 and 500,000 people. The movement — relying on creative forms of protests like demonstrations on horseback and yoga sessions designed to express dissent — has been calling for Rosselló’s immediate resignation. 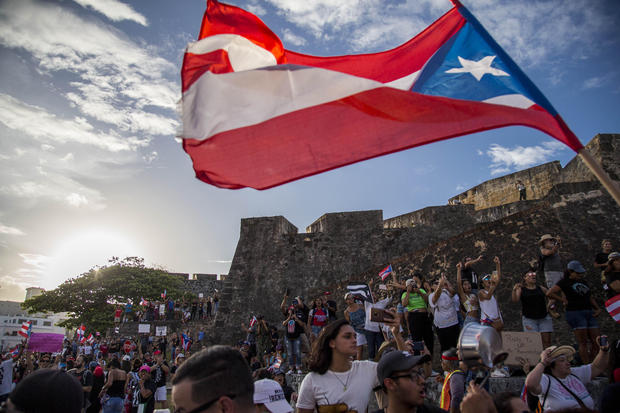 Demonstrators march against governor Ricardo Rosello, in San Juan, Puerto Rico, Wednesday, July 17, 2019. Protesters are demanding Rossello step down for his involvement in a private chat in which he used profanities to describe an ex-New York City councilwoman and a federal control board overseeing the island’s finance. Dennis M. Rivera Pichardo / AP

Thousands of Puerto Ricans are expected to block the main artery into the capital of San Juan on Monday morning. The planned demonstrations to halt traffic at the Luis A. Ferré highway has already prompted nearby commercial centers and businesses to close shop. Activists believe it will serve as a key moment in the political turmoil that has beset Puerto Rico for more than a week.

Some members of Congress, the island’s non-voting delegate in the House of Representatives and several of the two-dozen Democrats vying for the party’s presidential nomination have joined the protesters in calling for Rosselló’s resignation.