CHATTANOOGA (WDEF) – The Tennessee Valley Railroad Museum is supporting the ongoing changes at the Choo Choo.

They say they have been involved in the repurposing of the old railcars.

“TVRM has worked with the developers to make the necessary changes in the railcar locations so as to enhance their activities while preserving surplus cars for future use either by the railroad museum or other organizations.”

They say four of the old cars will be relocated to the museum’s campus on Cromwell Road and two more cars will go to other organizations.

They add that one car was in too bad of shape to rehab, so they will use parts from it for future restoration projects.

The Choo-Choo’s connection to railroads goes back much further than the actual hotel.

In 1909, it began as the city’s brand new passenger train hub as the Terminal Station.

Years after passenger service ended in Chattanooga and the facility had fallen into disrepair, developers converted the old Terminal into the current hotel attraction in 1973. 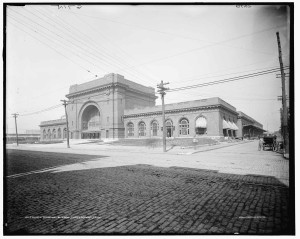