Why recycling efforts are getting trashed

Over the years public service campaigns helped push recycling into the mainstream. But many people have been doing it wrong.

Cross-contamination with trash now threatens the industry. China, the world’s biggest buyer of recycled materials, stopped importing a lot of our salvaged goods last year because they were too contaminated. They now turn down anything that’s not 99.5 percent pure, uncontaminated material.

That prompted some communities to end their recycling programs, while others cut back on the types of items they accept.

And if people’s aren’t sure whether something can be recycled, they toss it in the bin anyway, an act called “wish-cycling.” It’s gotten so bad that the industry says an average of 25 percent of “recycling” is actually trash.

On a recent day in Orlando, three brave souls agreed to haul out their recycling bins to let correspondent Tony Dokoupil take a peek inside and (with the help of Mitch Hedlund, from Recycle Across America) do a little audit.

There were also many things that should have gone straight into the trash, such as Styrofoam food containers. “This is a total no-no. Styrofoam, this cannot be recycled in your community,” said Hedlund.

Or paper plates. “Paper is recyclable, but not this kind of paper,” Hedlund said. Neither are paper towels, napkins or tissues recyclable.

Correspondent Tony Dokoupil checks out what some people have been (incorrectly) putting into their recycling bins. CBS News

Hedlund told one homeowner, “This all together, everything that you’ve done, and you’ve put good effort towards, the whole thing’s going to landfill.”

Before you judge, know the errors we caught here are being repeated across America. Hedlund said, “Just in general, recycling can be so confusing that people just don’t take it seriously.”

And if you’ve ever wondered where all that recycling ends up, there’s a good chance it’s at a sorting facility like the one owned by Waste Management. Twenty-four hours a day, five days a week, its workers are catching all our mistakes.

Mike Taylor, who oversees recycling operations in Elkridge, Maryland, showed Dokoupil what happens to the materials we put on the curb. At the pre-sort belt, workers look for items that shouldn’t be in the system in the first place. They target what they call “tanglers,” which can get caught up in the sorting equipment. Things like plastic bags, coat hangers and garden hoses. 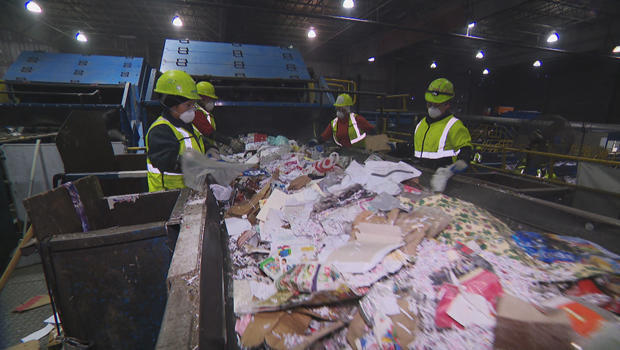 Workers separate out items that shouldn’t be mixed in with recyclable materials. CBS News

Other items that should not be in recycling? Plastic film, foil, Styrofoam egg cartons, golf balls. “When in doubt, throw it out,” Taylor said.

Hedlund’s organization is trying to remove all doubt. Recycle Across America advocates for standardized labels on both home and public recycling bins, spelling out exactly what can be recycled in each community. The labels, in use in Orlando, and coming soon to other cities, may be our best hope for pulling recycling out of the dumps.

“If the public’s willing to do it and we have the infrastructure in place to do it, then the industry and municipalities owe it to all of us, as the public, to make sure it’s easy for us to do right,” Hedlund said.