For people who’ve lost their ability to walk, there was a time when only a wheelchair meant mobility. But there’s something new under the sun, a device that – step by step – could soon help the disabled to walk again, IF they can afford it. Our Cover Story is reported by Lee Cowan:

His medical checkup only took a few minutes, and Derek Demun was anxious to get on with it. The one-time high school surf champion and big-time snowboarder fell off a roof nearly a decade ago and broke his back, leaving him paralyzed from the chest down.

But he’s about to do something that only a few years ago would have been all but impossible: walk, using a robotic exoskeleton. Demun activates it by shifting his weight; sensors and small motors move his legs, mimicking a natural gait, while his upper body catches up with the help of crutches.

“It’s really heartbreaking to see some of these people out there without the ability to better their lives,” Demun said. “Everybody should be able to live their lives the best they should.”

“And this device gives people that option?” Cowan asked.

Derek Demun walks with the aid of his ReWalk exoskeleton.

The device, made by a Massachusetts company called ReWalk, was the first exoskeleton to gain FDA approval, in 2014. Since then, a handful of other brands have gotten the government’s go-ahead. But that doesn’t mean getting one is easy.

“There’s been a lot of things with spinal cord injury that have been hype, but I don’t want to believe that with this one,” said Dr. Ann Vasile, who has been working with paralyzed patients like Demun in Long Beach, Calif., for some 25 years.

“There’s been moments that have been very hard on him to not have that life that he had before,” Dr. Vasile said, “and his mom said to me, ‘Derek can’t stop smiling [when he’s up and walking in the device].”

As you might imagine, they’re not cheap. ReWalk’s newest model costs around $100,000.

“The onus is on us in the healthcare field to prove why this will benefit the patient medically and ultimately save money,” Dr. Vasile said. 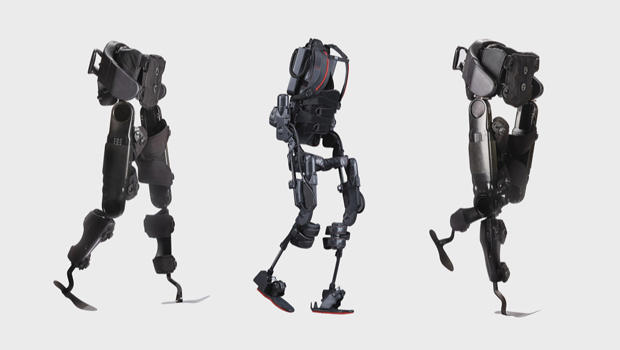 Those who are paralyzed suffer from a host of dangerous side effects that come from being in a wheelchair. One of the most common are pressure soars, where the skin can become infected because of the constant squeeze on the same area – the very condition that contributed to the death of “Superman” actor Christopher Reeve.

Getting up and moving, Dr. Vasile says, is the best prescription to fight them. “If it were my child, I’d rather buy this than buy a car,” she said. “And if I keep somebody out of a hospital because they haven’t developed a urinary tract infection or sepsis or a pressure sore, I bet I save that amount of money pretty quickly.”

But for some insurers, exoskeletons are still largely viewed as experimental. “It is not walking for me; it’s getting my body moving, keeping my heart rate up,” said Ashley Barnes. She was just 35 when doctors told her she would never walk again, the result of a botched medical procedure. Unlucky, yes, but she soon realized looking around her rehab facility that there were others worse off than her.

Because she still had use of her hands and arms, she was a clear candidate for a ReWalk device. But when Barnes put in the request to her insurance, she got a denial.

So, she applied again. “And we get another no. No matter how hard we kept going, how hard I fought the fight, it was, ‘no, no, no.'”

She even appealed to Texas Governor Greg Abbott, who himself was paralyzed in an accident. But his office sent back a letter saying it really couldn’t help.

Tyler Densford was paralyzed in 2016 after he fell out of a helicopter during a training exercise while on active duty with the Tennessee Air National Guard. “I didn’t see any way of leaving a bed, and I thought, ‘Why not just die? Why even be here?'” Densford said.

The Department of Veterans Affairs offered to cover exoskeletons for eligible veterans, and Tyler tried one at a VA facility in Atlanta. 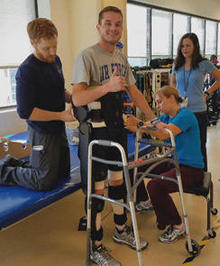 Tyler Densford stand in an exoskeleton.

Although the experience was brief, he’s never forgotten the feeling.

“The day of my accident was the last time I ever stood up, and being upright it’s almost like, ‘Hey I’m normal again,'” he said.

For now the best way to stretch his entire body is in a pool.

An exoskeleton would give him freedom like nothing else, but they require training, something the VA facilities near his home outside Memphis didn’t offer. Densford said, “From my end, I kind of feel like I’ve exhausted all resources. I’m not really sure who else to go to.”

Without it, the side effects of his paralysis continued to worsen. The day Cowan visited, Densford had just returned from yet another expensive stay in the hospital. “I had to have a surgery done. If I had had a ReWalk, I wouldn’t have had a pressure sore.”

Since our visit, the Department of Veterans Affairs has updated its policy, expanding the number of places that provide exoskeleton training. It’s up to veterans like Densford, however, to find a facility that meets those guidelines – and so far, he’s still looking.

Ashley Barnes was so sick of waiting she took out the equivalent of a mortgage and bought one herself, something her friend Carrie says has been a financial burden, but worth every penny. 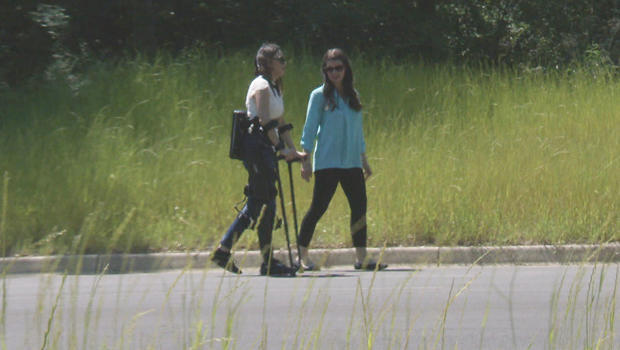 Ashley Barnes walks with the help of an exoskeleton.

“She’s not a sit-down kind of person at all, which is, I guess, sort of ironic that you’re in a wheelchair!” Carrie laughed. “But she’s up and going nonstop.”

At home, places like her kitchen are no longer as unforgiving as they once were. “Being up with you makes me just feel, you know, back in the game,” Barnes told Cowan.

And back in the game she is …. she’s even able to play basketball with her son, Brayden, a sight Ashley’s mom never thought she’d see: “She can stand up and look people in the eye and talk to people, and give hugs. And that’s just very, very important to her.”

Barnes said, “It prolongs my life. Because if I’m up and I’m moving, and I’m active, then that’s longer I’m here for my son.” 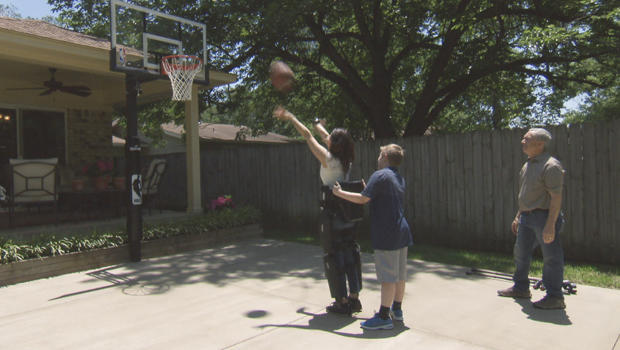 As for Tyler Densford, he’s tried all kinds of mobility devices, including an off-road wheelchair. But nothing replaces standing upright and walking.

Technology to help those with spinal cord injuries has come a long way; the future is here. But for some it still seems a long way off.

“If there’s something I can’t do, I figure out a way to do it,” Densford said. “Life doesn’t slow down for me, and I just always take it day-by-day, and find another way to do something the way other people do it.”

Will he figure out a way to get an exoskeleton of his own? “I think within the next couple of years I will have one, and you’ll see me walking around in it,” he said, smiling.